When is it permissible to update other people's answers for Python 3?

When is it permissible to update other people's answers for Python 3?

It's a slippery slope. But it would be such a minor change. Look at this little gem:

At some point in the (near) future, examples like this will no longer be relevant since new users will most likely start with Python 3 or later.

I imagine an organic change will happen regardless: OPs editing their examples, adding the python-3.x tag. And then maybe users updating other people's simple snippets like this gem.

Of course, the obvious problem is the breakdown of comment relatedness. The above example is a good one, because its comments refer to both Python2 and Python3, and these comments would be irrational if the code was updated.

A related meta-topic are questions of this sort, How to deal with hugely upvoted, bad and outdated answers?.

Personally, I would say that it's only permissible to change the code when no one uses any version of Python prior to 3. Until then, an additional answer for Python 3, coexisting with the Python 2 answer, would be better. (I wouldn't recommend editing Python 3 code into a pre-existing answer, because then if you make a mistake, that answer's poster takes the fall instead.) You could also comment on the answer, to let the poster know how it's done in Python 3. In cases where there are significant differences between Python 2 and Python 3, it may be better to just mark the question as a whole as being specifically relevant to Python 2, as Hans Passant said.

This is just my opinion, and I'm sure there are others who either partially or entirely disagree. I just don't like depriving the site as a whole of knowledge that can still be useful, and I don't like it when people put their words in someone else's mouth (regardless of whether the words are true, or whether it's something the person would say).

In my opinion, you are not permitted to simply change the code that has been given in the context of Python 2 being around and most popular.

There is a huge danger of decoupling questions and answers and comments from each other by doing so.

I think there are several options:

In any case, do not change the code.

If the question and its answer are really specific to Python 2, don't change anything, just make sure it has the python-2.x tag.

When answering Python questions, make them as compatible as possible with both versions. E.g. range(N) or print(head) will work in both versions (so the example in the question may acutally be one of the very rare cases where code may be changed - however best in consent with the posts author.); where necessary simply import from __future__. When using Python 3, leave a comment in the line which might be different for Python 2.

Remember: Python 2 is not dead (yet), it is still used more often than you might think, especially in productive, educational and scientific environments from where the highest demand for quick solutions on SO arises.

To simply put some numbers into play, here is a graph from a 2016 python-developers-survey: 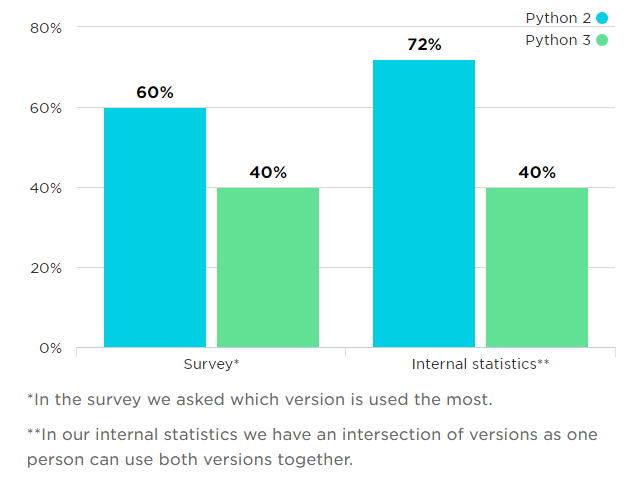 Nothing seems to directly say this yet, so I will. The rules are simple:

This is the ideal solution, because it's additive. You haven't modified the Python 2 solution in any way. And an update to a post is entirely in line with the rules stated for when to edit:

Don't be afraid to make a valid edit on someone else's answer, as long as you're not destroying their valid code. That's the way this site works. It's much better to do that than to leave comments, which are ephemeral, or to post your own answer that is almost an exact copy of someone else's answer. This is exactly why all answers are able to be collaboratively edited.

I like both answers (1, 2), but only parts of them. The truth is, when you do a google search for a python-3 question, python-2 tagged answers still show up in the search results, often at the top. And while I agree with not changing the original answer (because it did answer the question), I do this:

I figure that gives as much help as we can to readers looking for the Python-3 solution, without actually editing the answers. And it perhaps teaches readers to look beyond the first answer.

The code should not be edited. If you make any edits at all to the post, it should just be something to the effect of

before the code sample, or perhaps add the version relevant tag to the question. If you really want, you could add a comment to the answer linking to another answer that has a 3.x solution.

If you wish to add another answer for Python 3, add another answer for Python 3 (after checking to make sure there isn't already a high quality answer out there for Python 3, of course). I see this very routinely in [xslt] related questions, where Version 1.0 is still widely used (and sometimes the only option on a given platform), even though 2.0 and 3.0 have been out for some time now. The way it's handled there is to specify which version a given answer is relevant for, and sometimes providing examples for multiple versions if it's not clear what the asker was looking for, e.g.

However, this should only be done by the original author.

You should never assume that viewers will only ever want to see the latest version, and you should never go about "translating" code in accepted answers to something else. It's frustrating to sometimes see that the most highly upvoted and accepted answer isn't relevant on a more modern platform, but that doesn't mean it won't be relevant to anyone and it doesn't mean you should be putting your translation (which may or may not have been correct/trivial) into the hand of the original answerer.

The answer was edited adding both 3 and 2 versions of the answer. It has only gotten upvotes since then. It seems that every answer here is wrong: their opinions would not have let the answer to continue to be useful until today. Everyone won in this ordeal: the answerer is still getting upvotes, the editor put good information out there and the readers feel that that answer fulfills their needs.

There are two ways this site can handle this,

In other news, another proposal that would be tremendously unpopular from my reading, but that I would love and support is to mass-migrate the now unmaintained Python 2 to Retrocomputing StackExchange. That where unmaintained and marketed software should go, imho. The only minor hold back with Python 2 is that ActiveState currently does market support for the platform, which makes it not totally retro. That one distribution would be on topic here.

Python 2 is end of life unlike Python 3. We want to maximize the utility of questions and answers. Because of that, there are some situations I would definitely update code:

If the question is specifically marked as Python 2 and if the answer is the kind of thing that is more than a fun individual project, but could be used in a code that will persist, then I would consider updating answers to use six. This way, code that's written using the answer would be easy to update. six is available in Python 2 (of course), so the change is fairly transparent. For example, instead of:

Doing this early will save everyone a big headache later because, for example, six makes urlparse work the way the Python 3 version works. Before you make this kind of change, make sure that your change is actually transparent.

I do not edit out Python 2 information, but I will freely edit in Python 3 information.

For instance, say an answer has this code sample that only works in Python 2:

I will gladly modify it to make it look like this:

The new code works equally well in Python 2 and Python 3.

589
Introduce an "Obsolete Answer" vote
173
How to deal with hugely upvoted, bad and outdated answers?
222
When should I make edits to code?
99
Good question, old version-dependent answer
44
Are edits that insert Swift 3 code into existing Swift 2 answers acceptable?
28
Should we add the [python] tag to all [python-*] questions?
13
Are edits from Python 2's print to Python 3's print acceptable?
13
Suggested Edits that Add Swift 3 Code
-5
Changing the emphasis of python answers from python 2 to python 3
2
Are edits that make Python 2 code also compatible with Python 3 discouraged?
See more linked questions