The new review dropdown on the top-bar is a great addition.

One thing I noticed, the numbers only refresh when you reload the page. If you spend some time on a page and then click the review button to open the dropdown, the counts shown will completely differ from the amount of items actually in the queue at that current moment. 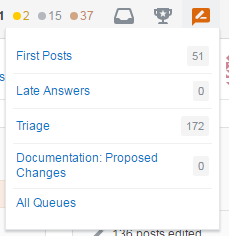 Shouldn't the numbers load when you click the review button instead of on page load?

As @TinyGiant pointed out, the list gets loaded the first time the button is clicked, rather than on page load. I didn't realize this, so this problem is less likely to occur than I thought. It will only happen if a user clicks on the review button, closes the menu, and then clicks on it again, rather than just clicking on it once and going to a queue. This does happen though, so it still would be better if the counts are as up-to-date as possible.

Having more up-to-date counts will help users see which queues are in most need of some attention. It also will prevent users from ignoring queues that say 0 when the count is really greater.

5
"Vote up" button does not work as it should in Triage
4
Should the "Review Queues" count in the top bar show just suggested edits?
70
When does the review button light up and when does it not?
51
Top-bar review drop down can be much quicker
24
Empty review queues?