Why can't I Vote to Close a question which was reopened?

I voted to close this question as duplicate of this question. as the OP's requirements first stated that he wanted the same thing as asked in the second question.

After closing of the Post (By me and a Gold badge holder), OP said he had been mistaken in expressing his intent (He wanted to filter, not sort). Admittedly, I just saw his statement of purpose, spotted the line of code causing the crash, told him the reason behind the crash and VTC'd.

Anyways So another Gold Badge user reopened the post and answered it.

The New Question was still a duplicate of this other question.

But now when I try to VTC it again, I can't cast a vote. 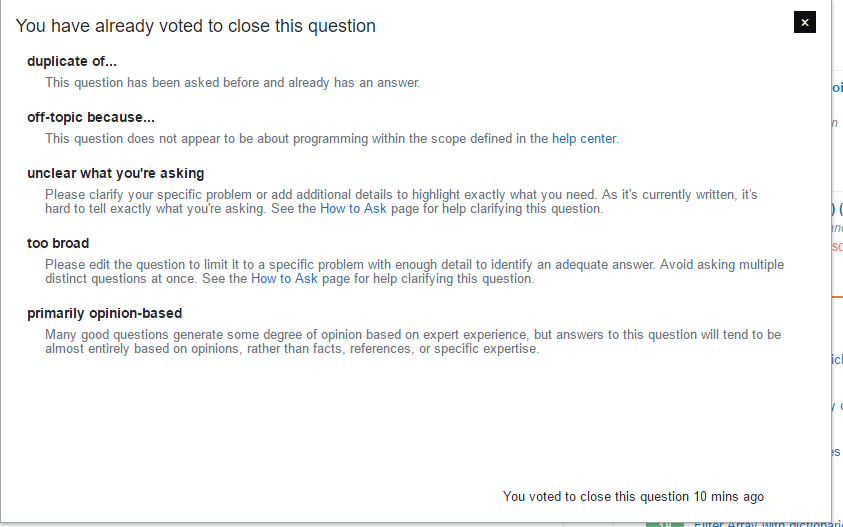 Why can't I vote to close now?

What is the rationale behind not allowing previous Close Voters to cast another Close-vote on a reopened post?

Why can't I Vote to Close a question again after it was reopened?

This check is in place to avoid "close-wars" as commented above by Memor-X. The system wants a different group of users to decide if a post needs to be closed again (even if the closure reason is different).

The official reason is mentioned by Shog9♦ on Meta:

This restriction exists because when it didn't exist folks would get into "close-wars", wherein the same sets of users would repeatedly re-open and re-close controversial questions. Yes, it does break use-cases where questions must be closed repeatedly. Fortunately, those are less common.

10
Revoting for a duplicate is not possible, how should that case be handled?

56
Why can't we vote to close a question after the original vote was retracted?
57
Flag question vs. close vote vs. both?
52
Could we have a reduced close vote requirement on "why isn't this code working"?
21
Should users be permitted to both answer and close a question?
90
Allow change to a close vote after question is edited
15
How can we prevent "close/opening wars" between gold tag badge holders around possible duplicates with only-code-no-explanation answers?