I want to provide a bit of feedback on a new feature I've seen on Jobs in the last few days.

I've noticed there is a new indicator on some Job postings. It is a notice under the tags associated with the job indicating you can be one of the first 10 applicants

At first this seemed like a good idea and a way to determine the competition level for the position. However, after visiting jobs a few times and seeing it in action, I've found myself ignoring some of these postings and instead wondering "what's wrong with this posting"

Here's an example of a recent search I performed. Notice that all of these jobs are less than two hours old: 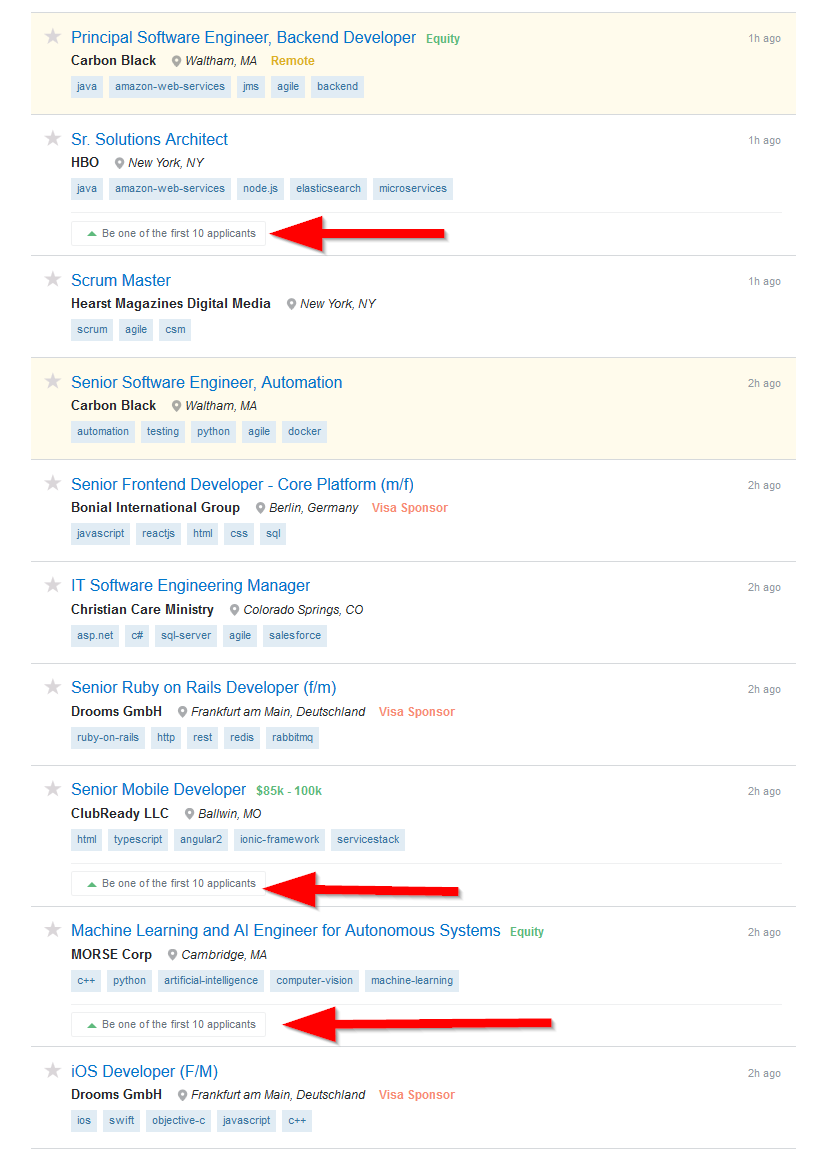 In this listing of newest jobs, there are three that have (presumably) had less than 10 applicants already. Great for Stack Exchange and the other companies that are posting here! But, I find myself wondering: "What's wrong with these companies that they can't draw applicants when others posted at the same time can?"

So, I ignore those posts.

I don't think it's your intention that we should ignore these postings. I'd guess that you would much rather me view these as I did initially ("Look, less competition and a newer posting, I should take a look"). I can't seem to shake the feeling that these feel "damaged" some how though, especially when there are postings that have a "<1h ago" time stamp that are not getting this notice and a post that is hours old still has a "be one of the first!" notice.

What is the goal of these new indicator?

Thanks for your invaluable feedback. That is a feature we're testing right now, exactly to see how having a badge affects the apply rate.

Our hypothesis is that seeing the badge in a job would make it more appealing to candidates, as a "signal" that they may have a better chance than with a listing that received hundreds of applicants.

There are a few caveats though:

That's why lots of really fresh jobs don't have the badge, just because they weren't eligible in the first place.

We have plans to improve the badge if we graduate the experiment (meaning: including listings that use external ATSs and estimating the amount of applicants based on the clicks they've received).

I personally never realized how this badge could actually hurt the quality perception of a listing, and your point makes a whole lot of sense.

Again, thanks for sharing your thoughts.

Not the answer you're looking for? Browse other questions tagged support stack-overflow-jobs .