Tag synonym creation rejected even though it has no approved synonyms

I wanted to make web-console a tag synonym of firefox-developer-tools, but it was rejected saying that the synonym already exists. The message looked like this:

A synonym from web-console to firefox-developer-tools exists, chains are not allowed

Though the page of firefox-developer-tools synonyms says that it doesn't have any approved synonyms. 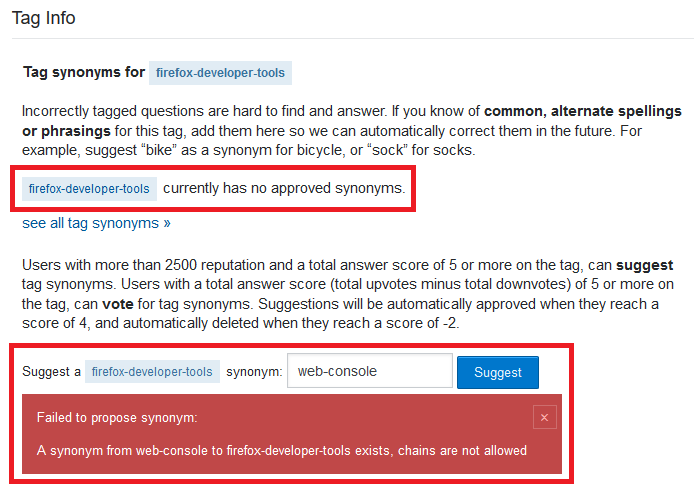 As it says "no approved synonyms", I suspect that somebody already suggested to make web-console a synonym, which is not approved yet. Though the given info is confusing in this regard.

Is that the case? Or is this a bug? What are users expected to do in this case?

24
Please undo all of the current [git] tag synonyms (and reject [github] synonyms)
36
Could not propose [stringformat] as a synonym for [string-formatting], due to proposed synonym on *third* tag
41
Let's handle the backlog of tag synonym suggestions
12
Proposing a tag-synonym fails with a confusing error-message
81
A list of tag synonyms which are not proposed in Stack Overflow
1
Velocity tag wrong synonym to appfabric-cache
10
Tag synonym information shouldn't be hidden
26
Should [dotty] and [scala-3] be synonyms?