I am happy that help made it back into the design.

That said, there seems to be an issue with some users reading the link instead as "help chat". For example, in c# we are getting users asking about their question bans. I assume they just clicked on the first chat tile and we happened to be the most recent one, which would also imply that other rooms have seen this happening recently as well.

Perhaps, it could be moved down just one line? Just to differentiate the two?

Alternatively, as suggested by BSMP in a comment there could be pipes used to differentiate the links

Or maybe there could be a different color scheme used, or hover effect.. something? Not set in stone on either approach, any suggestions for alternatives would also be appreciated.

The help obviously needs to be visible directly at the main page, without the need to go click some strange unintuitive monochrome burger-shaped icon. To hide it away in the burger menu creates a worse site for everyone.

Edit after clarification in comments below:

The solution is to keep the question mark icon on the menu no matter who the user is.

For a new user this help link is not visible from the current menu and it took a meta post on MSE for me to figure out where it was (so how a new user will find it, I do not know)

The help section is in the footer

You have to click on the sites bar on the right and it's not clear where to find it by looking at the icons.

Unlike the current layout for all other sites

which is much clearer on where to find things, with a drop down menu 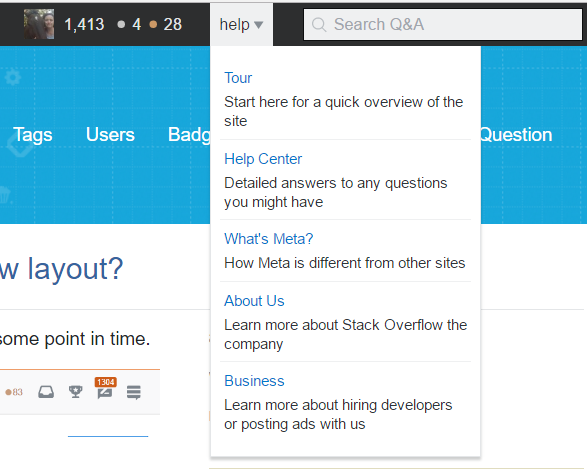 The help section needs to be in a prominent place, with a drop down list, as we are so often referring new users to it.

Instead of pipes for distinguish items I suggest to use dots like already used in achivements popup:

2
Is the chat link gone?

4
Superscript text is hard to distinguish from the line above
200
Can you please add underlines to hyperlinks?
25
Recent achievements icon color
8
Visually distinguish code highlighting tags