What is the proper way to deal with help vampires that repost closed questions letter for letter under a different account? 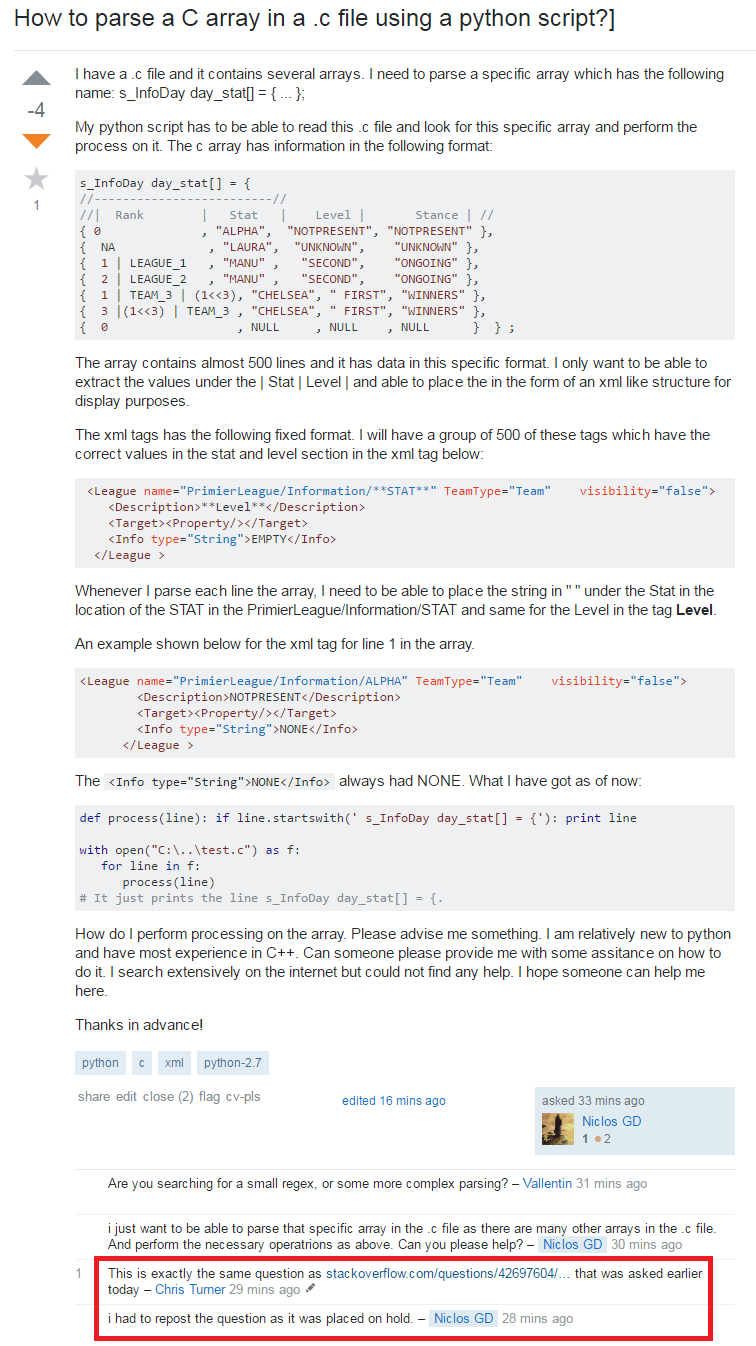 This is a self admitted copy of How to parse a C array in a .c file using a python script? now deleted as well that was posted under a completely separate account/user name.

Notice that the only difference in the title is the trailing ] that they lazily added when the system would not let them use the exact same title. I discovered this behavior when I tried to fix the title and take the trailing ] out assuming it was a fat finger typo.

To make matters worse it is a duplicate of a legitimate existing question from almost a year ago that has answers.

How many more accounts does this same person have and how many times do they do this a day? Is there something in place that automatically detects exactly the same content (or pretty close which should be easy to do) and auto flags it for moderators or something?

What is the most effect and efficient way for the the community to deal with this type of behavior?

A word-for-word repost of a question by two different accounts is almost always worth a custom moderator flag. Make sure you call out that this is an exact copy of another question, so that we don't misread this as someone asking for a question to be closed as a duplicate. A link to the other question is really appreciated, too, since that makes it easy for us to pull them up side-by-side.

Exact duplicate reposts like this are usually the result of one of three things: someone attempting to work around a question ban with new accounts, a group of students or coworkers trying to increase exposure for the same problem, or someone trying to farm reputation by copying a highly-voted old question (usually also then posting plagiarized answers from that question).

While it may seem to be a simple duplicate, these copied questions by multiple users are often threads that have let me unravel voting rings, block question-ban evaders, or track down plagiarists. For example, in this case I was able to remove several question-ban evading accounts as a result of your flag and block a series of IP addresses. Not only will that clean up and remove these questions, it will most likely prevent dozens of other bad questions from being posted by this same person or group.

I should say that it's not a particularly common thing, and I've heard that it would be expensive to query for duplicated questions outside of those asked by one user, so I don't know if it makes sense to have SE work on an automated flag for this. Maybe there's a better way to detect these as they come in, but I don't know what that would be or if it would be worth the development effort and potential computational resources.

Ideally, if the old question hasn't been deleted and the users were the same, closing it as a dupe of that would be a good path to go.

However, if the user has created multiple questions analogous to this because their original one was put on hold, or they're different accounts altogether, then it is best to involve a diamond moderator.

A custom flag explaining what's going on would've been sufficient.

There's no need to name them here. All we're going to do is pour fuel onto the fire.

You could have an autoflagging system does a word intersection and count either words or phrases or sentences that are identical. Then a moderator comes along to decide on whether to accept it or not.

Then set the sensitivity to x% of words or sentences in common then it gets autoflagged. It may have to run as a cron job for completeness, or maybe limit the checking to the last months posts or something.

Leave a comment stating that the question is a repost, and then flag the repost as "rude or abusive". Reposting a question verbatim from a different account just because the original question is closed is blatant abuse of the site and should be dealt with accordingly.

18
How should I handle users reposting their closed question with minimal title changes?

4
Should we delete the [string] and [array] tags because they have no experts?
12
On the use of multiple accounts to pre-emptively get around a question ban
2
What is the proper way to deal duplicate questions?
22
Canonical dupes regarding C loop ordering and cache performance
365
Would a note about preferred pronouns qualify the same way as a "thank you"?
24
Constructive way for users to improve benchmarking questions that get closed as a typo