Request for redesign to have better compatibility with 1024px-wide displays

Personally, while I do have other machines with bigger displays, I'm currently dividing most of my time between my ThinkPad T43 and my ThinkPad X61, which both run at 1024x768. There is an undeniable bit of friction using SO on these due to the omnipresent horizontal scrollbar visible on every page.

Now that the site has been redesigned I thought it might be worth revisiting this old question. In particular, I wanted to point out that the boxes on the right side of edit pages (eg, #scroller) are position:fixed and do not horizontally scroll even when they extend off the right of the page. This diverges somewhat from the (downvoted) official answer in the old thread: "it shouldn't be broken, but we're not going to make it pixel perfect." Well, the theme is now broken.

I found it interesting to observe how Jeff Atwood himself popped out of the woodwork to chime in and argue for a responsive design when this was being discussed in January 2015. Food for thought.

TL;DR: There (apparently) aren't enough 1024px users to statistically justify a site change. There are, however, enough users out there that this issue will continue to be quietly brought up every now and again. Fixing this across the entire Stack Exchange network for those people would be amazing. :D

Another question: I'm curious what types of metrics you're using. Do you send a new ping on each page load? Browser windows might be different sizes from different visits. The 15" Macbook Pro has a 2880px-wide display... users might want to split SO with their code editor or another window.

For what it's worth, I use the following user stylesheet to make Stack Overflow and other SE sites work in a narrower window:

One of the reasons I'm user the analytics don't reflect the need for this is that many people that would benefit from it actually have bigger screens. The metrics for my browser right now are going to show 1920x something. That doesn't mean I wouldn't prefer to run this in 1024x if I could! In fact I very much want to.

I use a tiling window manager and do most of my browsing with two side by side windows open. This means I have about 950px available for each browser. Unfortunately with SE sites not working at this size I have to either load the mobile version or switch to a full screen layout for all SE sites. I do some of both because having to horizontally scroll is just infuriating, but this should really be fixed with some responsive magic so that the sites are useable at any size.

I wouldn't even care if all the content was accessible. Loading the mobile site actually has the advantage of eschewing the sidebar stuff which is great when you're focusing on a task rather than just surfing. A responsive design could just drop whatever doesn't fit.

I use a projector at work (being farther from the screen greatly reduces eye strain), and as a result while my resolution is high, the screen width is only 1007px. This causes a horizontal scrollbar which causes all sorts of annoyances to me.

I understand that my screen dimension is not in the "mainstream", and so I fixed this issue for myself a long time ago. I have now made it available at large through a free chrome extension.

You can get it here: https://chrome.google.com/webstore/detail/stacknarrow/gedamclmheaaaghbopmamikcgdpibikn?hl=en-US

The code (in case you want to port it, don't worry copyleft, i.e. free to do whatever with) is at github: https://github.com/travisjj/StackNarrow

And here is a sample screenshot at a screen width of 1007px: 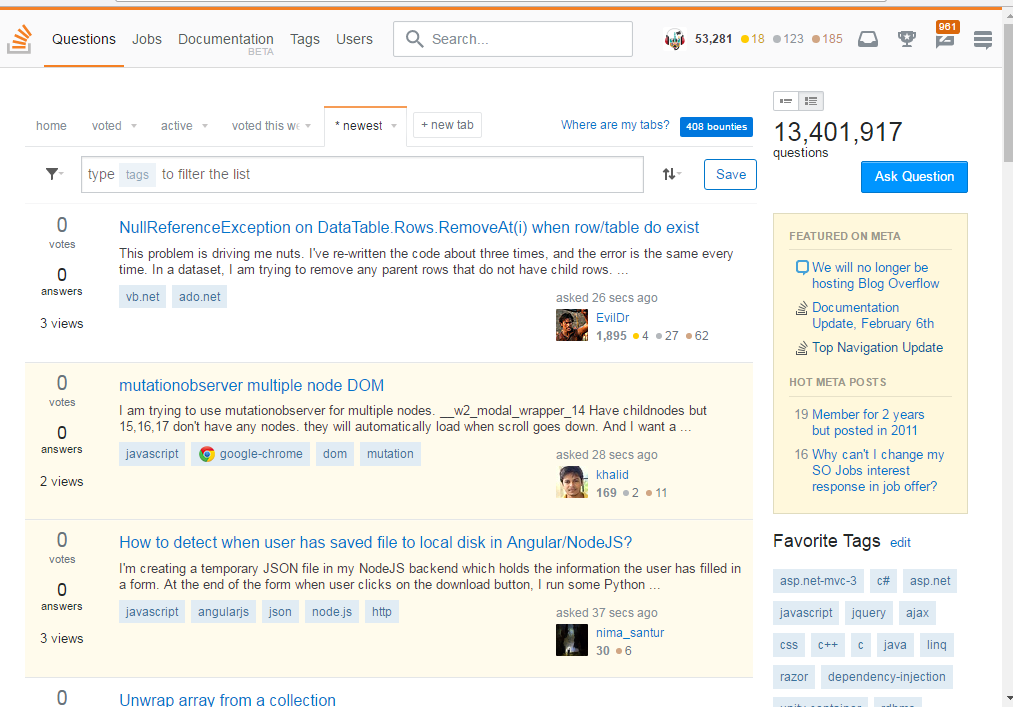 71
Should I upvote an originally-poor question that I have edited into understandability?
154
New page layout too wide for 1024px
11
Rejection reason for "causes harm" too wide with new layout
256
Careers Unificintegration: Jobs on Stack Overflow
137
Request: edit/clarify the "Stack Overflow Isn’t Very Welcoming" blog post