Documentation examples are not examples [closed]

It bugs me already a long time. There's inconsistency in what is called "examples". In the documentation section I was originally willing to find many examples for some topic, because this is how things are called there - Topics & Examples. But we don't create alternative examples which we could upvote/downvote and choose from. We call the example that we create some "sub-topic" and it is exactly it - a sub-topic, containing 1 or 2 examples by the guy who created the subtopic under the "examples" section.

This opens problems. By creating an "example" we "occupy" that. There is no space for others to suggest their own alternative examples of the same sub-topic! I mean, if you create another example - that is duplicating, but that is the only way to receive feedback by votes! On the other hand, if you decide to edit the original "example" by posting your own code as an example - then you must decide where to put it, as the last example? or as the first (because you think your example is better)? or maybe to delete the original code example? Then you cannot receive feedback by up/down votes. So users of the Documentation are not always seeing the best examples of topics, simply because actual code examples are not up/down voted. Only the sub-topics (so-called examples) are voted on depending on their usefulness, basically. However, the actual examples within that sub-topic might not be clear enough.

Does anyone else see this inconsistency? What if we just rename the "example" to e.g. "sub-topic"?

Take a look at this, which I ran into recently (which I found useful, but it clearly illustrates my doubts about the structure/naming): 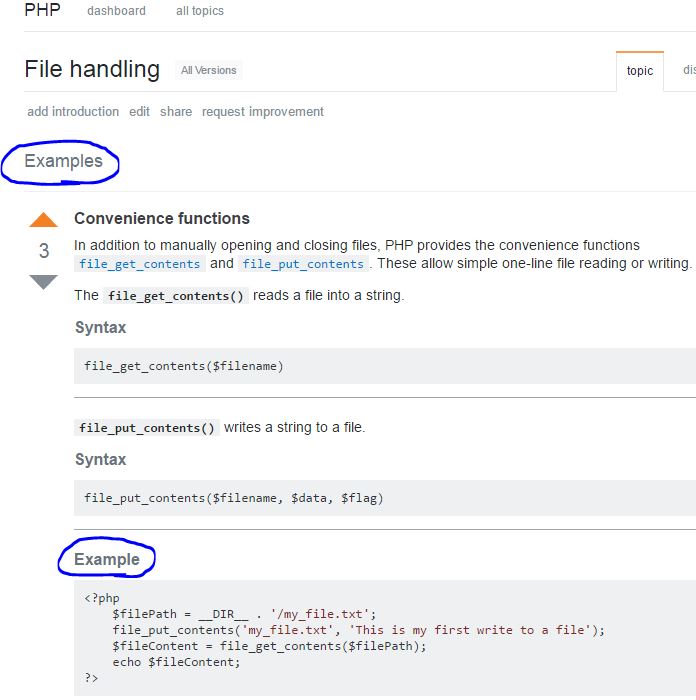 Looking at the OP's example, these are my thoughts.

TL;DR: Don't hesitate to make good edits, even though the rep and vote feedback systems are bad. Split Examples up as new Topics where appropriate.

I removed many markdown tables here, for example. It's just unhelpful duplication of official docs, requiring very little effort from those who edited it in, so you shouldn't feel hesitant about removing it.

The number of examples in the Example

We call the example that we create some "sub-topic" and it is exactly it - a sub-topic, containing 1 or 2 examples by the guy who created the subtopic under the "examples" section.

Within the Example there should be only one example. Maybe it will be multi-part (looking at a single problem a few different ways), but it should not be a list.

If it's turning into a list, then the sub-topic is clearly too broad. You can split it up, leaving just one example, and moving the others to a new Topic, linked to the current Example. If you don't want to get the rep for creating those derived Examples, file an improvement request and let someone else do it. Here's an example of creating a Topic out of a sub-topic and then linking to it.*

Where to put new contributions related to the Example's sub-topic

There is no space for others to suggest their own alternative examples of the same sub-topic! I mean, if you create another example - that is duplicating, but that is the only way to receive feedback by votes!

As mentioned above, I think the Example should only have one example. Don't hesitate to overwrite the current example if you think it can be improved, since...

If you regard your contribution as a variation of the current example, spinning off a new Topic (as mentioned above) seems fine and allows for somewhat better up/downvote feedback.

* I'm moving Examples instead of splitting one up here, but it's the same idea.