What happens from the asker's perspective when their question gets deleted?

Just came across this really bad question in time to also downvote and give my delete vote; which got the question deleted.

I assume: when the user is "around" while the question is up; he can observe all the downvotes and comments he receives.

But assume he isn't; but coming back an hour later ... is anything of that still visible to him? Or does he just come back and finds his question "vanished"? Without any further information what exactly happened?

The user won't get notified their question was deleted, but they are still able to access the deleted question from https://stackoverflow.com/users/recently-deleted-questions/theirID, which is available, although not entirely visible from their profile*

Going to their question, they will see it's deleted, the reason it was deleted, comments on the post. They are able to edit their question and cast an undelete vote (Thanks @Tiny Giant). This won't undelete their post, as they'll need 2 other users to vote to undelete (self-deleted posts can be instantly undeleted by a user though).

Once a post has been deleted, it will disappear for all users except developers, moderators, and users with over 10,000 reputation. Deleted questions will also always be visible to their authors, regardless of the author's reputation. However, deleted posts can be undeleted by casting undelete votes. Once a post has 3 undelete votes, it will no longer be deleted. Self-deleted posts can be viewed, edited, and undeleted by their original authors. 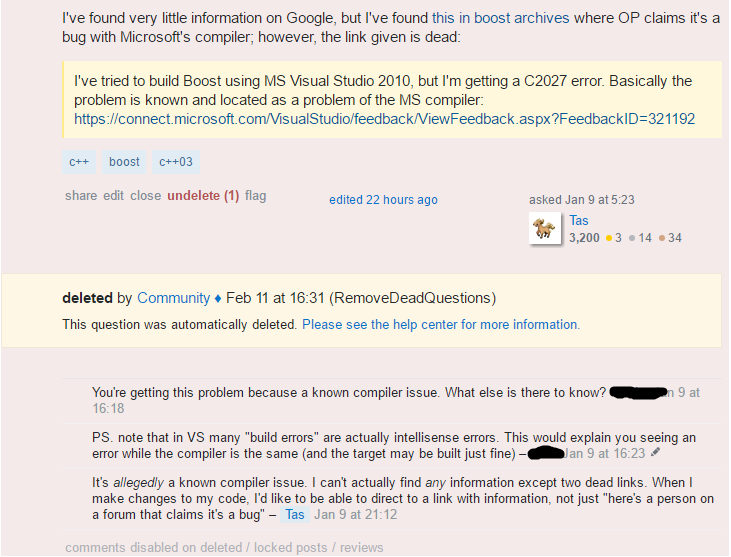 4
Are users notified of deleted questions?
37
What is a reasonable length of time to give for a poor question to be improved before voting to delete?
67
Aren't new users throttled asking questions anymore?
6
Does a user get notified of question deletion
80
Send notification when question is closed or deleted

4
What to do when an asker answers in his own question?
72
What to do when a question you answered gets deleted intentionally?
4
Did Stack Exchange delete my question from my "Deleted Recent Questions" page?
84
Is there any "secret" information kept about users ... that only moderators can see?
14
What happens to answer flags when their question is deleted?
57
Why do "homework dump" questions get migrated?
16
What would be the limits for further explanations to an answered question?