How do we remove a Documentation tag? [closed]

So I noticed that SEO now has Documentation. It has one topic with one example that says this (literally)

Detailed instructions on getting seo set up or installed.

So let's count the problems here

So how do we get rid of this junk?

We haven't spent much time thinking about removing Documentation from a tag because we're focused on helping folks contribute. So the "garbage entry" is the default topic and "example". It's purposely worthless as an example in order to invite proposed changes. Additionally, the Community creates a several improvement requests to guide users in the right direction. Clearly it didn't work in this case.

So the first step is to actually create a route to reset a tag to the stage where nobody has committed to it. Since I'm not a developer, I'll just assume it'll be easy to invalidate the commitments and remove the topic. (In the future, I suppose we should consider what we'd need to do when some proposed changes have been approved. But that's not the case we are looking at today.)

The essentially blank introductory topic isn't intended to be the anything like a final state for a tag. Over on Area 51, we've had a similar problem when people propose a new site and then don't start adding example questions. We have a process that deletes these proposals after 3 days. That way there isn't an unsupported proposal blocking the progress of potentially more successful attempts. I mean, you could revive the moribund proposal, but it's a lot more exciting to be there for the start of the process. (This is true both of Area 51 and a tag's documentation.)

We might also consider improving the standard Improvement Requests to give users a better idea of what they need to do. Currently, the initial IRs are a bit busy: 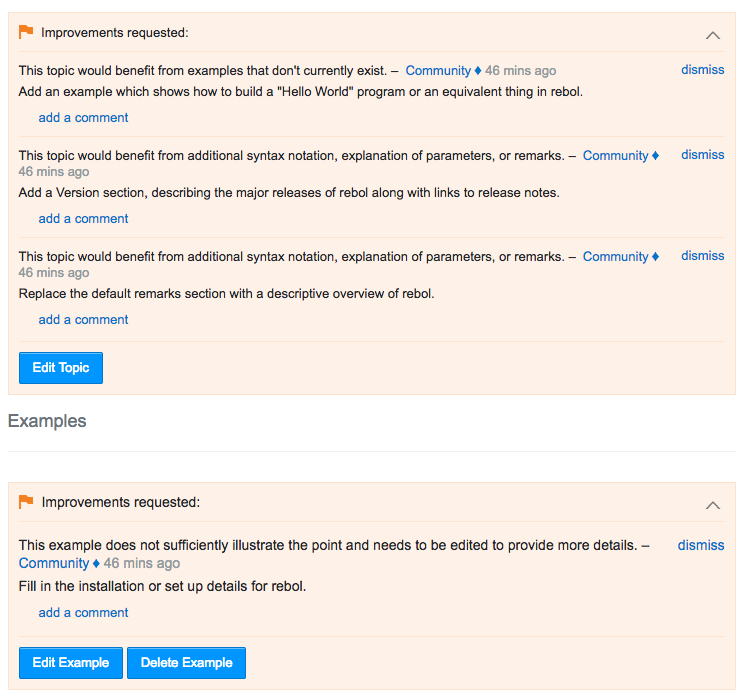 I think that's an example of choice overload. It might be better to have just one topic-level improvement request that says something like:

Please fill in this topic with examples useful for someone just getting started in $tagname. Also update the Remarks section and, if applicable, the Version section. This tag's documentation will be be removed unless it has at least one approved proposed change by $today+7.

Although it is kind of nice to have several discrete tasks to do over time, having so many choices makes it hard to focus on the critical path.

Not the answer you're looking for? Browse other questions tagged support documentation .

88
Provide asking instructions for SEO
21
Do we really need documentation for [youtube-api]?