The contributor list for Creating and Initializing Arrays has become corrupted.

Several minutes ago, I noticed my reputation had dropped by just under 2k. So, I started investigating. Based on these two Meta questions:

Investigating further, it appears that all of the contributors for Creating and Initializing Arrays have been forgotten / become corrupted. Currently, the contributors page for that example shows only one contributor, which is obviously erroneous: 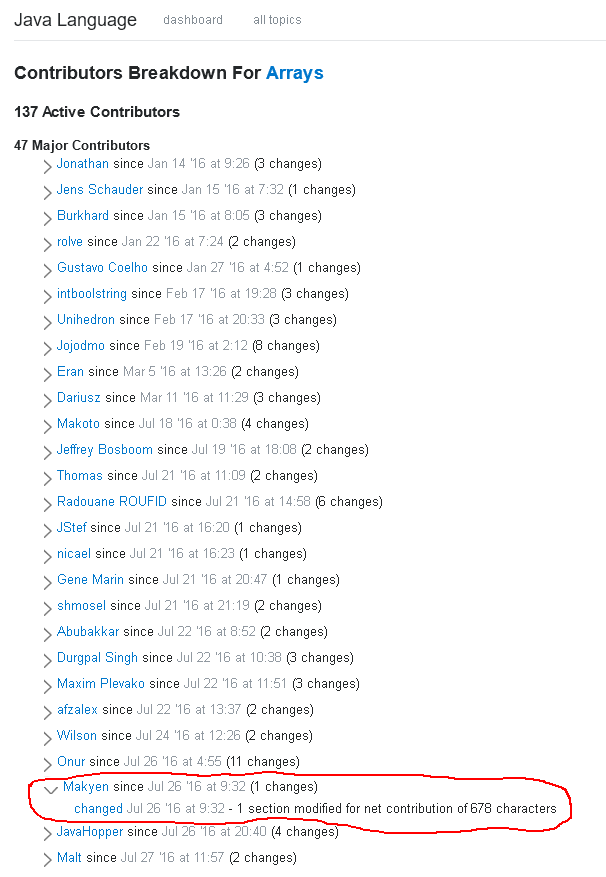 There has not been any activity in the Java topic which would account for this issue (e.g. there is not a rollback to a pre-July 26 version).

###Contributor list corruption may contribute to other reported reputation losses

Note: This question is reporting a bug, not a concern about lost reputation. I'm not concerned about losing the reputation points; overall, I have negative feelings about gaining reputation from Documentation. As a side benefit to this bug, I had been wondering how much reputation I had gained, in total, from that one Documentation edit. Now I know: just under 2k.

Alright, I think I've patched everything up, rebuilt all the contributors, and recalc'ed the rep of all affected users.

Backstory: for reputation calculation purposes, we have a "Contributors" table that makes it easy to determine both when a user edited a topic/example and how large their contribution was. It's all denormalized data, built from the raw topic/example history records, so it can become incorrect over time if we have bugs.

The major bug occurred when a contributing user was merged with another user (this can be a self-service process or even automatic). During a merge, only that user's contributions were taken into account when rebuilding contributors on the topics/examples that user worked on. This meant all other users' contributions were erased :(

There were a few other smaller bugs, mostly around the first contributions a topic/example had, which have now been fixed.

This took a bit longer than expected, as I needed to build up some unit test helpers/tooling and I was out for a week with the flu. Good news is new bugs (and there probably will be, it's complex) should get fixed faster :)

194
How much reputation is given per documentation post per day - convert to community wiki
106
Documentation Update, February 6th
67
Documenting the problems with documentation
49
Reputation lost and there's no explanation
108
I've just lost 1760 reputation points without explanation
25
How much rep do I actually have?
14
Remove select languages from Documentation per community decision
10
How can I find out the reason for losing near 300 points of reputation
5
Documentation contributor chain on an Example is broken after a Topic move
2
Point deduction after user deletion is wrongly displayed
See more linked questions