Allow feedback to the SO team about companies, when they themselves may not be able to

I've been seeing an advert for jobs for Manor Racing pop up for a month or two: 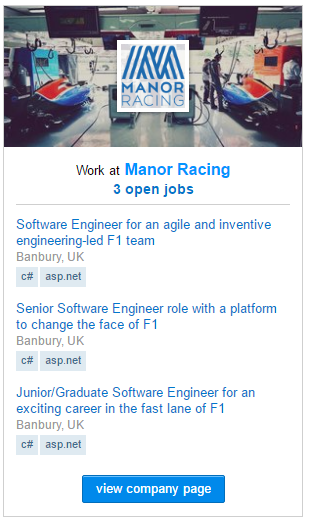 For those that don't follow F1, this team has sadly recently folded after a buyer was not found.

I was hoping there would be something on the job advert itself or on the company page where I could provide feedback to the SO team to potentially follow up with the employer so the advert can be removed from circulation (as I think it's unlikely that these positions still exist), but I was unable to find a way to do so. Normal adverts have the thumbs up/down icons - but there doesn't seem to be anything at all for job ads.

On the job listing itself, you can "flag a problem" (in the right-hand side bar), but I don't think there is any such option for the entire company. There probably should be.

I've now done this in this particular instance. However, in the larger view - a company that's gone into administration is probably not in a hurry to keep things such as their company page on a 3rd party website updated. It would be good to be able to provide feedback to the SO team at the company level via their page.

In cases like this, flagging the listing and indicating the company is no longer trading (just as you did) should suffice. I've spoken to their account manager internally and will take down the listings and unpublish their company page.

37
Is there a way to report a job banner if I'm sure it's a fraud?
6
Jobs "type" and ambiguous search keywords
9
Who should ensure job advert tags "do their job"?
9
How to get job alerts for a specific company
16
Don't automatically create a recent search in Jobs
4
Apply to jobs on external sites using developer story
24
Stack Overflow Jobs Update - April 2018
14
Can't see list of available job positions when logged in