In the spirit of science, we're going to run a test on the Low Quality Review Queue.

After pulling some stats about how the LQRQ is performing, we confirmed that review is handling a ton of posts, but it's not able to process them fast enough. The review queue gets 60 minutes to handle the post before it also heads to the moderator queue. If it's not completely reviewed in the 60 minutes, then either the moderators or review can handle the post.

We don't want things waiting in review for hours to be handled by the community, so we're testing if lowering the number of recommend delete and delete votes will move things along.

What Happens At The End Of The Test?

When the 30 days are up, I'll rerun the queries to see if the review queue is able to dequeue posts before the moderators can handle them. Ideally, we'd see an increase in the number of posts being handled by review during the 60 minutes before they hit the moderator queue. After some sanity checking on the accuracy of the review queue at 4 votes, we'll specifically look for the following:

Just do what you always do. If you review in the Low Quality queue, then continue as you normally would. We expect most users will continue their normal patterns during the test.

I'll be back in 30 days to report what happened.

Our 30 day test has ended, and as promised here are the results.

In the last 30 days, there were 22,517 flags that were sent into the Low Quality Review Queue. Of these:

We had a noticeable increase in flags being handled faster by review, instead of lingering for several hours. If review is able to keep up with what is being sent in its direction, then that minimizes what the moderators have to handle.

During the 30 day test, we saw a drop in invalidated reviews (aka mod-handled tasks) to what they were before the past election and the number of deleted items increased: 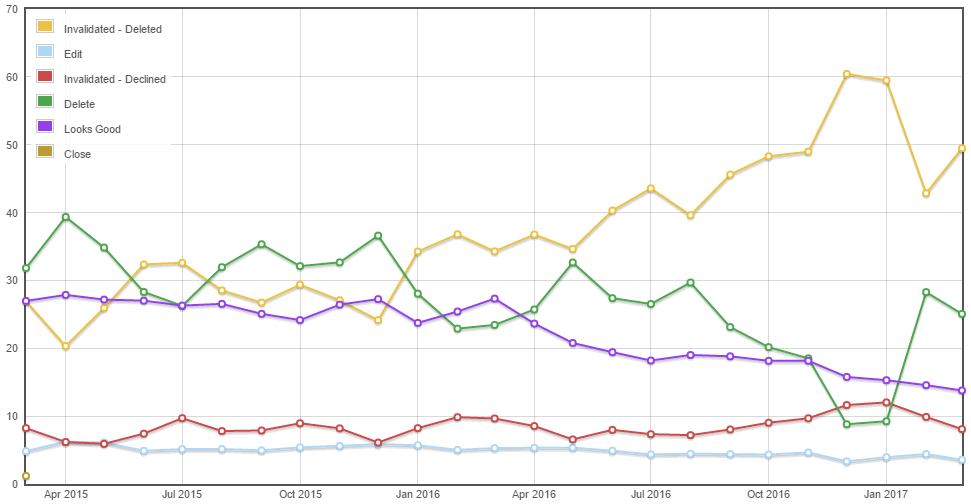 This is exactly the outcome we were hoping for with the test. We wanted to see review be able to handle items faster, taking the burden off of the moderators but still have accurate reviews taking place.

One observation from the test is there was a small drop in the Looks Good and in the Invalidated - Declined categories. Which means that review is deleting a small number of things that the moderators most likely would have declined. However, we did some sanity checking on those items and considering the purpose of Low Quality Review Queue is to remove junk, we didn't see anything that wasn't so fantastic that it needed to stick around. We will be monitoring this to see if we need to make any further adjustments.

As I mentioned in the original post, if we saw an increase of at least 20% in what the review queue was handling, we would leave the new threshold in place. Well, we exceeded our expectations, so we're going to keep the 4 Recommend Delete & Delete votes on the Low Quality Review Queue.

We'll still be watching to make sure the community can handle what's being thrown at it and adjust as needed in the future.

153
Merge the "Not An Answer" and "Very Low Quality" flags into one
111
2020: a year in moderation
97
2018: a year in moderation
116
Stop using our delete votes in the LQPRQ when 20k-rep users recommend deletion
23
How does the LQPRQ work?
12
A series of declined flags
19
On the performance of the low quality review queue
4
How can a 4-year-old answer scoring 11 be flagged as VLQ?
3
Why are some flags reviewed very fast?
2
Is triage question limit increased?
See more linked questions

17
What happens if I flag an answer that is already in the Low Quality review queue?
8
Why do we place code-only answers in low-quality queue
286
You're doing it wrong: A plea for sanity in the Low Quality Posts queue
211
1, 2, 3...test. Let’s increase the number of reviews & close votes for science!
57
Fixing the disconnect between VLQ and Triage
19
On the performance of the low quality review queue
2
Can we see what review queue test questions were used as "tests" for?
12
Low Quality Posts Review Queue Response is "Delete" instead of "Recommend Deletion"