Are the tags next to job offers randomized or, at least, automated?

Sometimes I peek at the job section of SO to get a feeling of what's hot and what's not. I understand the less-than-scientific methodology behind it but it still gets me an idea, not to mention the opportunity to learn new buzz words etc.

I've been under the impression that the companies' representatives picked the tags in the adds themselves but today I stumbled across the one shown below. I'm rather familiar with .NET world and there's nothing that I even vaguely could refer to in terms of job offer with the tag .net-framework-version. 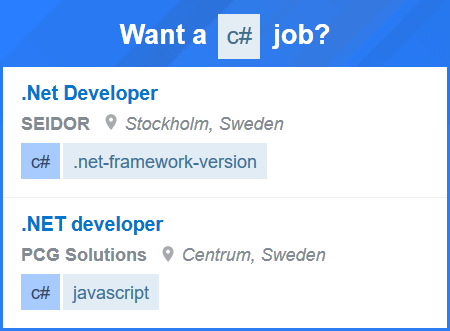 In fact even the wildest association would be by far better expressed using other tags. In that, I've taken into account that the person picking the tags might be less technically savvy.

If they target a set of specific frameworks, it's far more natural to list those. If they intend to say wide, but unspecified, range of versions, it's definitely more intuitive to just say .net.

Are the tags automatically picked? Or is there a good explanation that I simply am too limited to figure out?

The job listings are tagged by the employers. While some of them may be vetted by our staff, by and large they are not. And some times you get weird tags like this.

While there is some algorithmic special sauce we use for matching your question view history to job tags (which is why you got the c# tag-themed job ad and why c# is highlighted), the other tags in a job listing are pretty much "anything goes".

Feel free to click the "Flag a problem" link on the job listing page and one of our support staff should take a look (and possibly contact the employer to fix the tag).

Not the answer you're looking for? Browse other questions tagged discussion tags jobs .

5
How to control what job offers are shown on the banners?
87
Are job offers spam?
4
Mails with job offers shouldn't include a job more than once
35
Stop sending e-mails with the same job offers
4
No job offers when setting location to Russia
3
Job offers per country with salary
5
Where are Job offers on the right side of the window?