List of all deleted questions, not only recent ones [duplicate]

Ask Question
Asked 5 years, 5 months ago
Modified 5 years, 2 months ago
Viewed 315 times
19
This question already exists:
Show me my own deleted questions and answers on my profile page
Closed 5 years ago.

Currently, in the questions tab in the profile page, there is a "deleted recent questions" button: 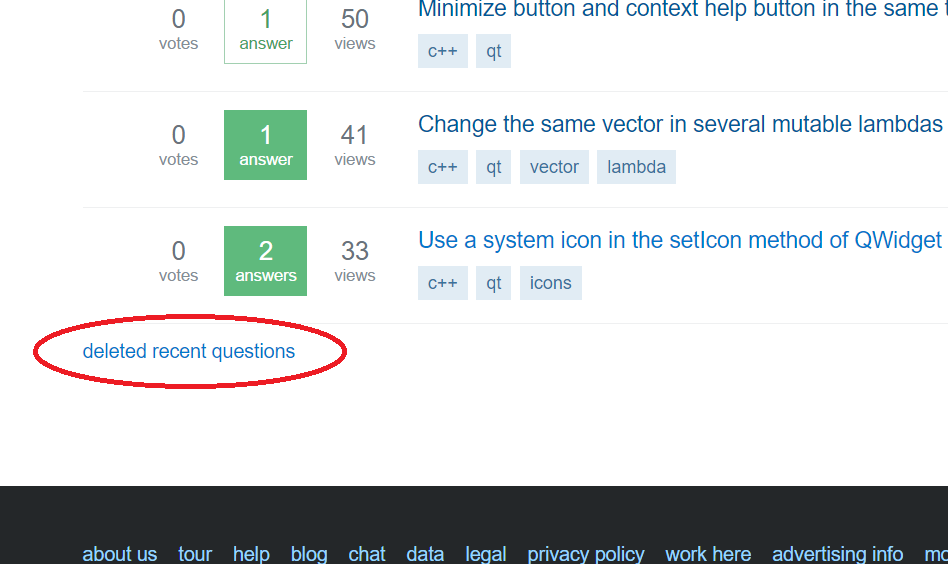 According to this answer, the questions that appear in this list are only the ones that were posted less than 60 days ago. However, I would like to see a list of all my deleted questions, no matter their age.

If it is not possible to view a list of all my own deleted questions, I suggest that the "deleted recent questions" becomes simply "deleted questions". The reason for that is that this may be useful for users who are banned from asking. These users may have asked a lot of bad questions which got deleted, and then two months later come back and notice that they are banned, having forgotten about their bad questions and not being able to find out why they're banned. Here and here are two of many examples of someone being banned from asking without knowing why since all his deleted questions were old. A moderator had to look at the user's old deleted questions to tell the user why he was banned. If my feature request gets implemented, users will be able to tell themselves why they were banned.

I personally have a similar issue, and I'm not the only one. It's not that I'm banned, but I haven't received the Curious badge on Meta because I don't have a positive question record. I recounted my questions to check using the formula from this answer and found out that I do have a positive question record, at least with the questions visible on my profile page. That's probably due to some deleted questions, but there is no way I can check since I don't have access to a list of my deleted questions.

20
Show me my own deleted questions and answers on my profile page
200
What's the meaning of "well-received question" and of "maintaining" a question?
8
Is there an adverse impact to deleting a question so quickly that the OP may not see it?
-7
Low-visibility question automatically deleted by single downvote
16
Show Your Deleted Questions in Your Activity History (Only Visible to You)
-9
Why am I still banned from asking questions?

26
10K users should be able to see deleted questions and answers on the poster's profile
3
Deleted answer in between non-deleted ones
120
Allow post-banned users to see all of their posts, including the old deleted ones
13
Can we change the completion bar on Curious badge to show the actual score from the formula?
2
Question that appears not to be from me in list of deleted questions