I stumbled across the software-engineering tag, and there are over 1,700 questions in it. Many of them are grossly off-topic for here, and I doubt that any that are eligible to migrate would make suitable questions on Software Engineers.SE, either.

Can we mass-burninate this tag? 1,700+ is a lot to ask of Meta; could a moderator possible consider automatic removal of it?

software-engineering questions are now either 100% retagged or closed.

Per TinyGiant's answer, I've started a chatroom to coordinate cleanup of questions tagged with software-engineering. The burnination bot, Burnaki is also tracking the tag to ensure accountability for questions with the tag that are closed or questions where the tag is removed.

It's worth noting that the tag has not been black-listed yet. 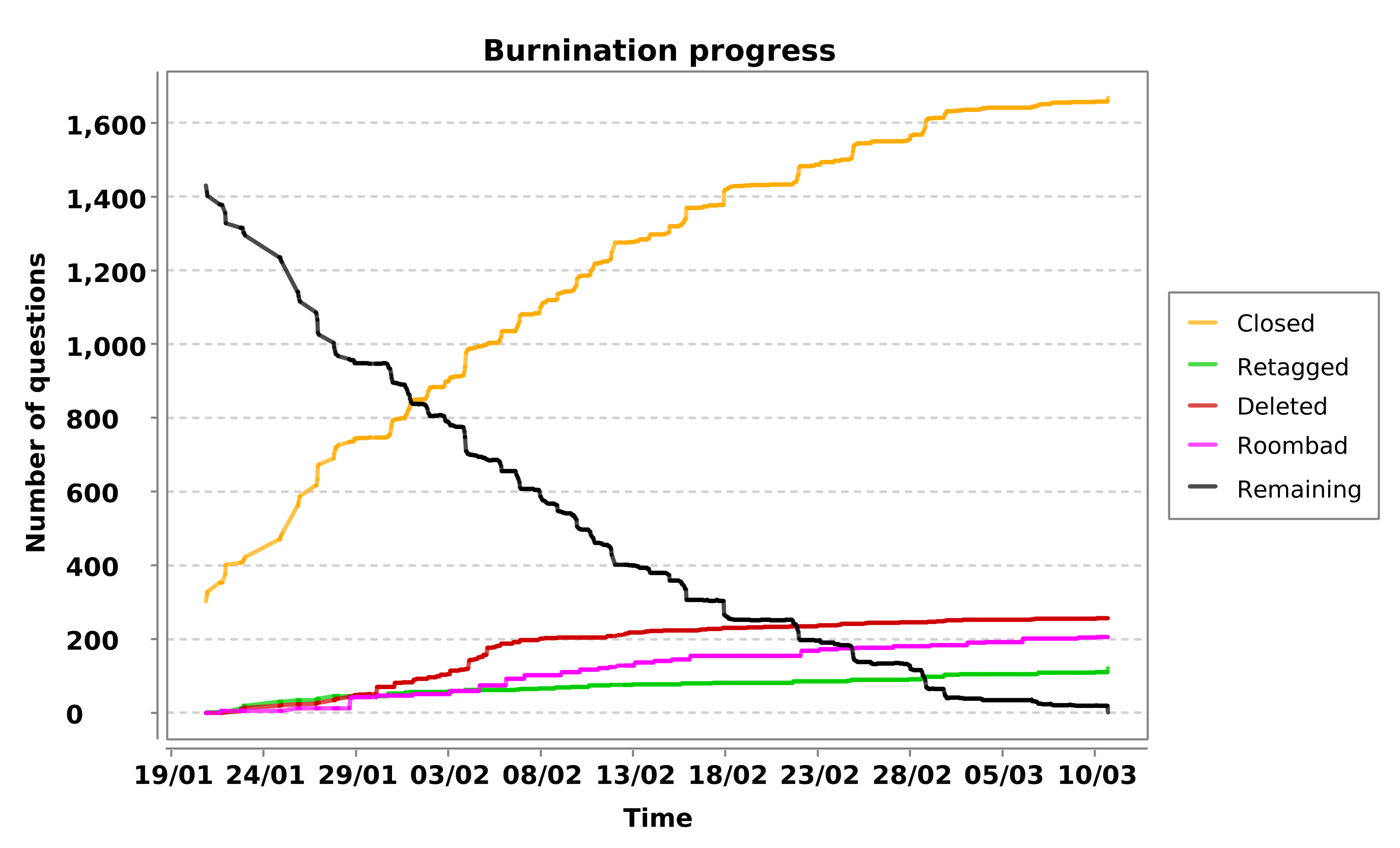 Remember that we don't want to destroy value so let salvaging a post be your first priority! If you have specific questions feel free to drop in wherever they can contact you, for example in the SOCVR chatroom, or leave a comment under this post.

I disagree with bulk removal of the tag right now. Currently we have a tag full of off-topic questions—and possibly some on-topic questions which don't require the tag—that we can focus our close votes and delete votes on.

I propose the following plan of attack:

On my first pass, I don't buy the stated reason for removing the tag:

There is an entire site dedicated to Software Engineering, at SoftwareEngineering.SE.

We have a site for Emacs and if someone suggested removing the emacs tag, I might need to have some strong words with them. The existence of Stack Exchange site that overlaps with a tag doesn't mean the tag is without value. (I also have to wonder why this only came up after the name change. Was not this the topic space of Programmers before the rename?)

That said, a look at the top-voted questions convinces me the tag is redundant with such tags as architecure, language-agnostic and software-design. It's an amalgam of "stuff programmers do that isn't directly coding". As such, it seems to fail at least point 3 (and probably #1 and #3) of Shog's "do we need to burninate?" criteria. So, I don't have any objection to just wiping it from the face of the site.

Since the tag has no reasonable replacement, I'd suggest cleaning up the edges by focusing on the lowest-scored questions. (That would be about here as of this writing.) I see nearly all of those questions are closed already. Once you've dealt with the dregs, let me know and I can clear out the tag everywhere.

Not the answer you're looking for? Browse other questions tagged discussion status-completed burninate-request .

16
Burninate or clean up the tags [freeware] and [shareware]
24
Hunt down [software-hunting]
30
This tag is such a [software-tools]
4
Burninate [reservation] tag?
24
Can we bring the hammer down hard on [statistical-analysis-soft]?
27
Can we burninate [microsoft-certifications]?
23
Should we burninate the [equivalent] tag?