How can I improve my question about Eval being evil?

Some times ago, I decided to post a question that I had in my mind for a long time.
It was about the evilness of Eval in C#.

There are several posts from Microsoft MVP and C# developers on the subject.
You can learn how it works. Learn about the late binding. The compiler call. All those posts are basically about performance, debugging.

But, in my mind Eval comes with a security hole. There are several casual allusions to the security issue. I just fail to find real documentation about this point.

So I felt like Stack Overflow was a good place to ask about it.

With no harm intended, not trying to hack or anything, the question was simple:
What can an eval on a db stored string can do that a more classical databind won't?
So everything that could be harmful with a simple databind was outside the scope of the question.

It was not really asking for any proof of concept for a server wipe exploit. It was more about the current restriction C# eval has or doesn't have.
The list of exploits that could be done even without proof was shown.

But I have made mistakes:

Even if I try to make my post clear and show my non-harmful intentions. My broken English and low rep may fool people into thinking I was a weird hacker. As they often fail to hide their intentions.

My early research on the topic was too light. I just quickly read the top 10 Google results on the subject.
And assumed that my question was legitimate and not fully answered by those posts.

Perhaps the Eval subject was an unspoken taboo, and asking about it made people direct their hate against this thing against the post.

The post could possibly be more on-topic on Security Stack Exchange.

With all those mistakes, I quickly reached the score of -10 on this question. Resulting in a question close. And a ban from asking.

I understand the ban as I mainly ask and post about telerik. And the low amount of visits in that tag doesn't bring many upvotes/downvotes.
With a low ratio of quality posts on the subject.

Expecting a meta effect, the only thing I would ask is how could I make this question "ok" for the community? Or how to stop the bleeding?

The question is about what could go wrong. Not about how to prevent it. It's not about how to fix Eval. It should be an advocacy on why not to use it based on the security aspect.

Let's screenshot part of your question to answer based on it: 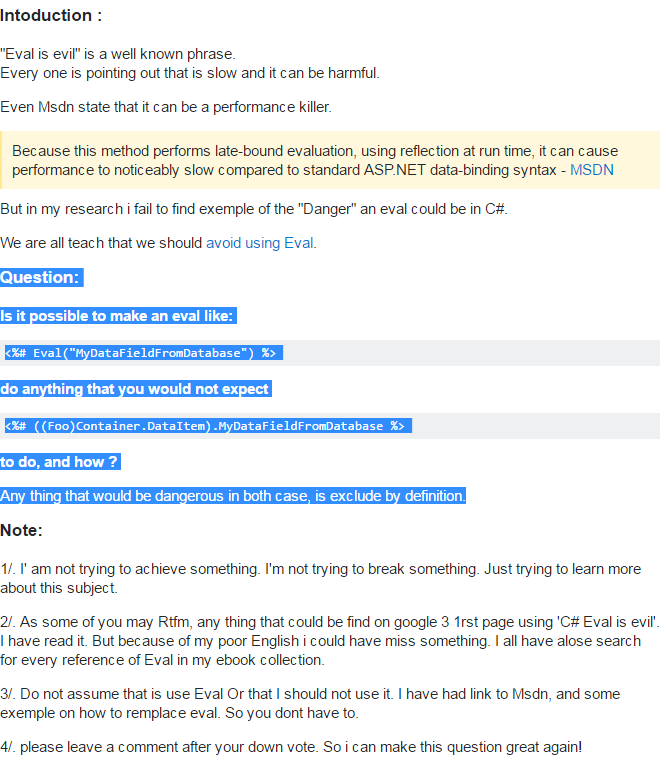 So for the "Question" part, it's quite unclear, remove the code inserts and it's down to: "Is it possible to make an eval do anything that you would not expect to do, and how?" It doesn't really make sense, and using bold text interleaved with code examples without explanation makes it even harder to read.

One way to rephrase your question could be:

I found documentation speaking about "Eval is evil", I understood it has performances issues, and even MSDN states it:

Because this method performs late-bound evaluation, using reflection at run time, it can cause performance to noticeably slow compared to standard ASP.NET data-binding syntax - MSDN

Out of the performance issue and considering the following code:

Can something be done to prevent the field to be interpreted in a dangerous way?

This could a shorter form, removing fluff around, showing you did some research and it becomes a relatively clear question, not invalidating the answer at the same time.

After last edit to question:

The question is about what could go wrong. Not about how to prevent it. It's not about how to fix Eval. It should be an advocacy on why not to use it based on the security aspect.

For the sentence I put in bold: then you're out of luck, we're here to build factual knowledge base, not to support your claims, specially when there's no evidence to support them.
You did claim something and want community backup? Great, now accept you were wrong and apologize to your colleagues as it turns out the reality is not your original claim.

If your question was really this you may have asked instead of the version above (keeping the search part to back it up):

Should I also avoid using Eval for security concerns? And if yes which kind of exploits should I prevent against if I really have to use it?

The question looks like applying a concept from one language to a completely different one, making it very confusing. "eval is evil" is traditionally a JavaScript expression. While it sounds like a good phrase to use for all other languages it very well could indicate complete misunderstanding of the concept.

While there are articles (like https://www.codeproject.com/articles/623516/the-evil-of-eval-in-asp-net) trying to promote the same "eval is evil" for other frameworks/languages its original and most common usage is for JavaScript.

The question would be much better if instead of

"Eval is evil" is a well known phrase.

you would actually demonstrate that you understand origins of the phrase and that you actually talking about the right one.

I've heard "Eval is evil" in context of JavaScript and seen plenty of discussion in (like When is JavaScript's eval() not evil?). I run into The Evil of Eval in ASP.NET article - so presumably ASP.NET Eval it is evil (covers performance cost similar to MSDN article). Are there additional problems (like code injection of some sort) with ASP.NET Eval similar to the JavaScript one?

Not the answer you're looking for? Browse other questions tagged discussion specific-question post-ban .