Why was this question off-topic?

I asked this question. It was put on hold:

put on hold as unclear what you're asking [...] 15 hours ago
Please clarify your specific problem or add additional details to highlight exactly what you need. As it's currently written, it’s hard to tell exactly what you're asking. See the How to Ask page for help clarifying this question.
If this question can be reworded to fit the rules in the help center, please edit your question. 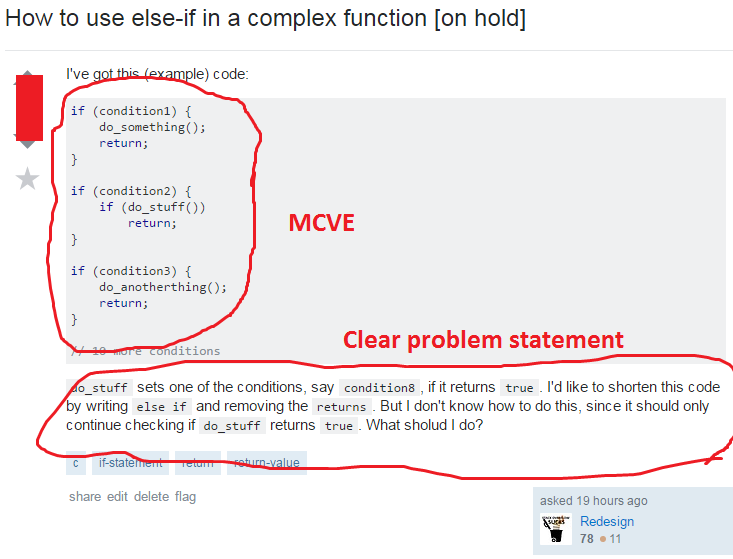 So what's the problem? Were the users who closed it wrong, or do I need to improve it in some way?

Furthermore, the question body is confusing. One of the reasons for this is that you're using dummy do_stuff() and condition8 functions and variables and then partly explain what this is supposed to do in the question body. Why isn't that in the code? And what is do_anotherthing() doing? Does that also set a condition variable?

I think I may know what you're looking for, but even after reading the question several times I'm far from sure. When in doubt it's better to ask for clarification (by providing comments and putting the question on hold) rather than guess and risk wasting time by providing wrong answer.

This is what the two people who provided a comment meant:

I'm making some leaps and assumptions. If the current function's ret type is void, shouldn't you be able to just put if (!do_stuff()) return; at the top? If that's not what you're after then please provide a mvce

It would be be great if you could elaborate the requirement. We cannot help you solely based on assumption from our end

You can always edit your question to make it clearer, after which it can be reopened if it's sufficiently clear.

Not the answer you're looking for? Browse other questions tagged support specific-question closed-questions .

14
closing unclear questions - which close reason to use and when?
20
Why are my flags disputed?
3
Question on hold
2
Why was this message in the close status hero box?