How to create a Minimal, Complete, and Verifiable example for C# UI related questions?

I understand that it is necessary to create a Minimal, Complete, and Verifiable example when posting questions to StackOverflow.

However, when dealing with UI related questions such as WinForms in Visual C#, a lot of the code for creating the Form tends to be very long, and are auto generated by Microsoft Visual Studio's designer.

For example, to create a simple form with a ListBox and a Button 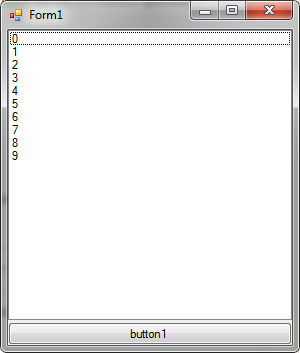 The following code is generated:

Meanwhile, the only code that I wrote is only a few lines in Form1.cs: http://pastebin.com/BNMCnKzX

So my thought was that for a Minimal, Complete, and Verifiable example, I should only include the code that I actually wrote, and not the code that was automatically generated. However, based by the close vote on my question Why does the SelectedIndexChanged event fire in a ListBox when the selected item is modified?, this does not seem to be the case.

So my question is, how much code do we need to include for a Minimal, Complete, and Verifiable example when posting UI related questions in C#, or in general?

Contrary to the advice of people who try and follow black-and-white rules instead of using their brain, you do not need to create a "complete" code-based example for questions about standard UI controls. If you've placed a ListView control on a form, adjusted a few of its properties, and wired up some event handlers, then you do not need to (and, in fact, should not) reproduce all of this as code. It is sufficient to explain what you've done in words so that someone competent in the technology can follow your explanation to reproduce the equivalent setup on their screen. In the above example, then, it would be sufficient to indicate that you've added ListView control, provide a list of the properties you adjusted and to which values, and then show the code you've added to the relevant event handlers.

The standard "MCVE" advice, while not wrong, is primarily for beginners who have no idea how to go about asking a good question. If you know the tools and can confidently answer the question "Can someone with reasonable knowledge about this technology use the information I've provided here to reproduce my problem?" in the affirmative, then you are good to go.

If you are not sure whether or not you have provided enough code or description, then it is easy to verify. Open up a blank project and try to reproduce the problem using only the information provided in your question. Could you do it? If not, go back and figure out what critical information was omitted the first time.

Minimal is good. No one wants to look at a question with huge blocks of boilerplate code that accomplishes trivial tasks. If you can't figure out how to drop a control onto a form and wire up an event handler from only a brief textual description, you have no business answering a question about it.

I have no idea why someone cast a close vote on your question. There is nothing wrong with the description and code provided in your question. I'd even go so far as to say that there's no reason to explain how you populated the control with arbitrary values for testing purposes. That isn't an interesting aspect of your question. Fortunately, the code is short enough that including it as you did doesn't hurt, either.

Go through each property one at a time:

If it doesn't need to be there, remove it. You shouldn't be including pages and pages of code that have nothing to do with reproducing your problem.

It needs to be a complete program; it cannot require code not shown to function as described.

Of course, you need to make sure that all the designer code being cut out isn't necessary to reproduce the problem, if some of it is, figure out the smallest program you can create that still reproduces the problem, and provide that.

Whether the code in your application was written by you or not has nothing to do with whether it's a part of a minimal complete verifiable example. You don't automatically exclude auto-generated code, nor do you automatically include manually written code. You include what you need, and only what you need, to replicate the problem.

This actually goes to the Verifiable part of the acronym:
A reader should be able to reproduce the problem.

So it could be as Minimal as

Drop a Button and a ListBox on a Form and add the following code to the Button_Click handler:

That is Complete enough.
Handwriting Forms code is not for beginners and may mask part of the problem.

Most of the UI questions I've ever seen asked, don't really need a reproduction - an image of the ui and a description of the issue is normally enough to understand the issue. You can always add the pastebin for those that wish to delve deeper, but your question shouldn't rely on it.

Here's an example question of mine that hopefully demonstrates a UI issue without the need to see all the code.