What to do if OP's effort demonstration may possibly answered the question?

I found this question about html and css:

How to make the button on the CSS

Besides the requests shown in an image, OP also puts some html and css into the question. While OP doesn't specify it is an answer, I found the results looks similar to the request shown in the image.I'm troubling to determine if the shown code is noise because:

Which interpret is more correct? And if we want to improve the question, should we delete the 'effort' or just closed as unclear, or other options?

Yeah, sorry, that sentence doesn't make any sense. I suspect this is Babelfishian or some other form of meaning-lost-in-translation. Since it's the only thing we have to hang our hat on here, I've closed the question as unclear what you're asking.

The original question was very poor:

OP only edited his post after he was requested to in comments. Look at the edit revision here: 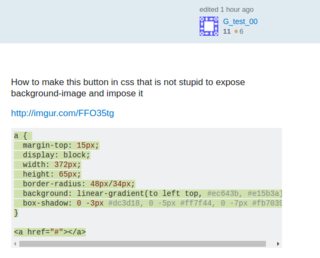 I'm not HTML and CSS expert, but if the info is enough to make the post clear and useful, the downvotes should be removed.

126
Should it be more obvious that stack snippets are only meant for HTML/CSS/JS?
4
Must a question be explicit?
50
Should an MCVE include boilerplate that's not required just because people incorrectly think it is?
34
Make [css3] a synonym of [css]
1
What is "Worked With vs. Want to Work With" and "Most loved, dreaded, and wanted" in the Developer Survey results?