Reach out to W3C

W3C seems to be outsourcing questions to the main site: 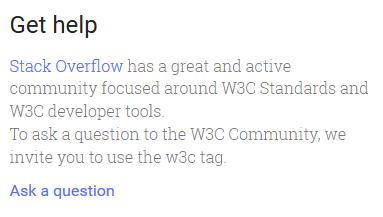 Stack Overflow has a great and active community

That's true. Nothing against this part.

That's not true. Stack Overflow is neither focussing on W3C Standards nor on W3C developer tools. There may be a small percentage of questions dealing with it, yes.

To ask a question to the W3C Community

That's not true. If you ask a question on Stack Overflow, you're asking it to the Stack Overflow community, not to the W3C Community.

we invite you to use the w3c tag

Questions in w3c are not as bad as those about Cloudberry. If it's necessary at all (because Stack Overflow is well-known, IMHO), W3C could at least do better redirecting here.

Considering this, it seems that this can be interpreted as:

Within the Stack Overflow community, there is a helpful, active sub-community focused around W3C standards and developer tools.

True, from a certain point of view. 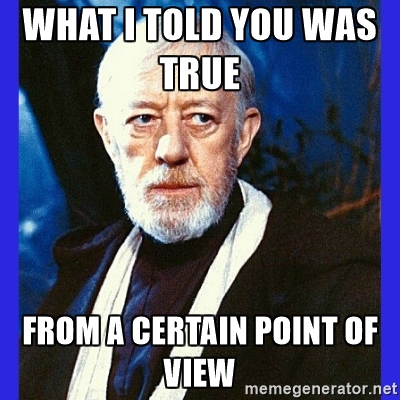 If there is a group of users which frequent [w3c], then they can be seen as this sort of community. Additionally, other users can be seen to drop in and out of this community from time to time, and the overlap with other communities (such as the [html] and [javascript] communities) likely makes it appear larger than it is.

To ask a question to this community, we suggest using the [w3c] tag.

Useful advice, but it needs clarification.

It would likely be best if they were to reword it, to clear up any confusion this may cause. Ideally, they could also ask and answer a few Community Wiki questions regarding common programming issues the W3C community may face, which can be linked to from their site as canonical; this would provide quick answers to common problems, make it trivial to resolve duplicate questions, and provide a good indication of what type of W3C question fits here on Stack Overflow.

Other official sources, such as Google (Android), Canonical (Ubuntu), and Microsoft (MSDN), integrate with and/or suggest that their users also use Stack Overflow and/or the Stack Exchange as a whole, and there's nothing wrong with that. It only becomes a problem if they encourage users to do so in a way that's detrimental to the site (such as, for example, trying to outsource their support); unfortunately, as it's currently worded, that appears to be the case for W3C's attempt to reach out. Hopefully it will be improved in the future, in a way that benefits programmers; instead of trying to outsource W3C support, it should encourage the W3C community to integrate more with programming communities as a whole, and not just migrate to a different site for troubleshooting.

All taken care of! I made a Twitter account and reached out here. Onto the next pressing problem!

But seriously, what problem are you trying to solve here?

Is it some sort of secret that people can post questions to Stack Overflow and get answers? Was this just something funny worth chatting about on the ol' meta today? Do we want to actively prevent people from promoting us?

Or is the issue that if a user gets to Stack Overflow without being properly educated in how to ask a question on Stack Overflow, it is far too late?

Because if that's what we're joking about then we pretty obviously have some serious soul searching to do.

380
Why can't I ask customer service-related questions on Stack Overflow?
35
Burn the web! [w3c]
83
Reach out to CloudBerry