We are receiving documentation requests from new Stack Overflow members with a reputation of 1 that look like this: 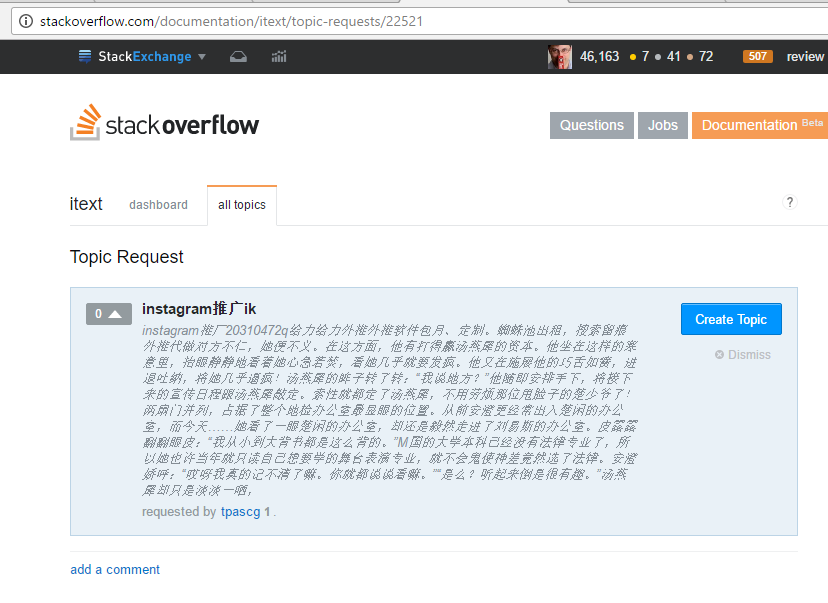 I ran this through Google Translate, and it's clearly SPAM.

Please, can someone raise the minimum required reputation for posting user requests? Otherwise we'll keep on getting these messages.

Both questions are related, but mine was different. It received a different answer (which I accepted). I'm looking forward to the update of the question. Kudos to Shog9 and to Adam Lear for implementing the blacklisting functionality.

Update: These are now thoroughly blacklisted. If they figure out how to get past that, I'll blacklist them further. Kudos to Adam Lear for implementing the blacklist.

Here's the breakdown of actioned topic requests grouped and sorted by the maximum privilege held by the requester:

By "actioned" I mean "caused a topic to be created" (many more appear to have prompted the creation of drafts that never got approved). Here's the breakdown of all requests that weren't part of this spam wave:

Slightly more on the low-end, but still over 90% of requests would do just fine if there was a 10-rep threshold for that privilege.

Now, just one problem: there's no actual privilege for this. I can't just crank up the threshold to 10 and be done; someone'd have to add logic to check against the privilege.

Meanwhile, these same spammers have been badgering Q&A for over a year; we've dealt with them by putting a blacklist in place to block non-trivial amounts of CJK text. For the past three days, I've been dealing with Docs spam by just periodically destroying anyone posting non-trivial amounts of CJK as a Topic Request; I've missed maybe a dozen requests because I'm only checking the title, but that leaves a false-negative rate of under 1% and a false-positive rate of 0.

FWIW, we added stricter rate-limiting for folks under 100 rep yesterday (1 request every 10 minutes) - that cut down the volume of spam a lot: 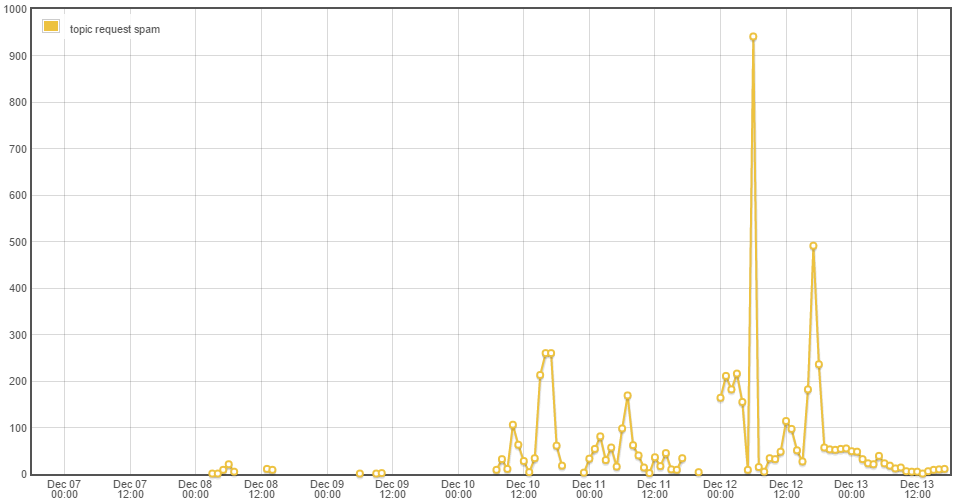 I'd kinda hoped they would just give up after that, but... No. Still creating new accounts, posting spam, getting destroyed.

Not the answer you're looking for? Browse other questions tagged feature-request documentation spam documentation-proposals .

2924
Warlords of Documentation: A Proposed Expansion of Stack Overflow