So when a user which is not in this specific time zone asks a question it may not get answered because not as many users are awake / online to answer it.

So it may be helpful if questions that are not answered within a certain time gets to be shown again on top of questions when the amount of users has increased. Thus, the question is more likely to be answered by more users since more users are available.

TL;DR: I don't think the problem you describe exists, at least not on a larger scale. You just might have been unlucky with a few of your questions.

So when a user which is not in this specific time zone asks a question it may not get answered because not as much users are awake / online to answer it.

That might be true, but there are also fewer questions to compete for attention. It turns out that these effects more or less cancel out, as noted here. In the graph below, you can see that there is some variation in the average view count, but not a real pattern. 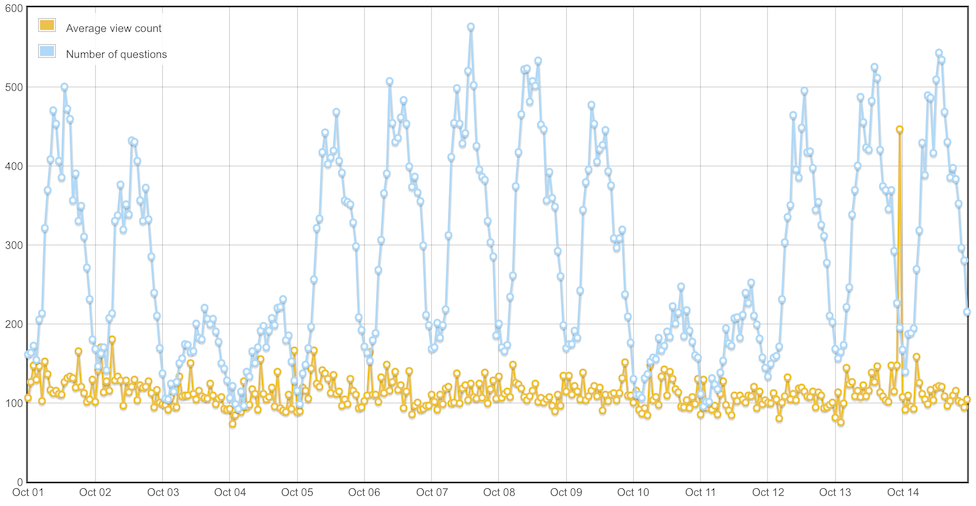 Now, if you ask a question in an obscure tag, and e.g. you're an Australian and most experts in that tag are located in Europe or the USA, your questions might escape their attention. However, most potential answerers browse questions by tags, and in a low-traffic tag your question will be longer on the frontpage of that particular tag.

38
Do questions posted on the weekend get less attention?
18
Community ♦ Modified Posts Appearing on Homepage

63
How to highlight difficult or old questions and then reward the answers?