I've started browsing the Documentation for some of my favourite tags and am looking to contribute. As a soft start to ease myself in, I came across the GROUP BY topic within the sql tag, which said it was missing a Syntax section.

Thinking this would be an easy and helpful thing to include, I took the MSDN syntax for the GROUP BY clause:

However, I was totally unable to get this multi-line text to appear as above when entered into the Syntax section of this Topic. I found this question and was able to get the code snippet to appear in the right format in my preview, but when attempting to submit my edit, I received the error:

Syntax must be formatted as a list of one-liners

Having read up a bit more on the intended purpose of the Syntax section (including the "Listing Syntax" yellow help box to the right when editing), it seems that perhaps this section is not intended to contain a syntax definition in the same way as pages on MSDN do, but rather is for something else - "removing duplication from examples" is given as the main reason it seems.

What exactly is meant by this?

If the intention is not to hold MSDN-esque Syntax definitions, should I be doing something about Topics where this is what has been provided (for example, the sql Topic on SELECT has a multi-line syntax displayed in a similar way to what I have tried to achieve, although I have not used their exact approach as the GROUP BY syntax would benefit from indentation, which doesn't appear to be possible).

Following discussion in the comments, as an example, let's just assume that I want to get the following text into the Syntax section (putting aside the fact that it's lifted from the MSDN page):

If I paste this text into the editor verbatim, I get the whole thing as a single line of text:

I can get it split onto multiple lines by adding newlines (which looks pretty ugly in the editor: 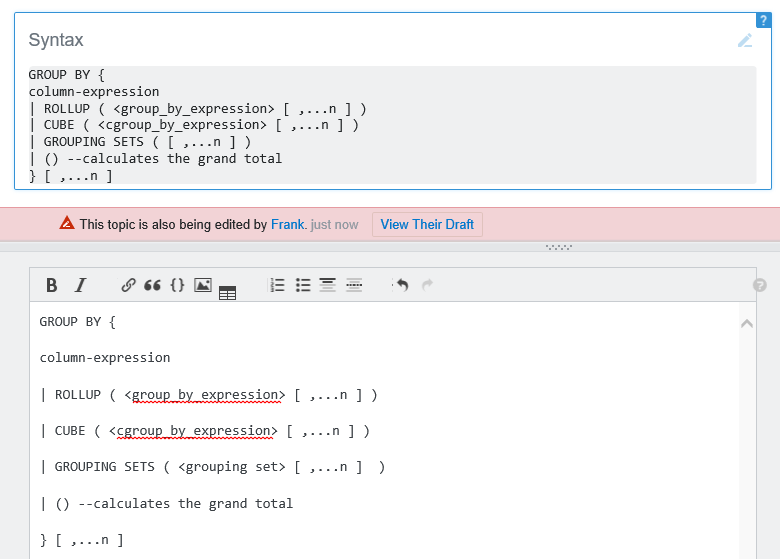 However, this will not submit due to the Syntax must be formatted as a list of one-liners warning.

If I add a bullet to the first line, it puts loads of space between the first and second lines: 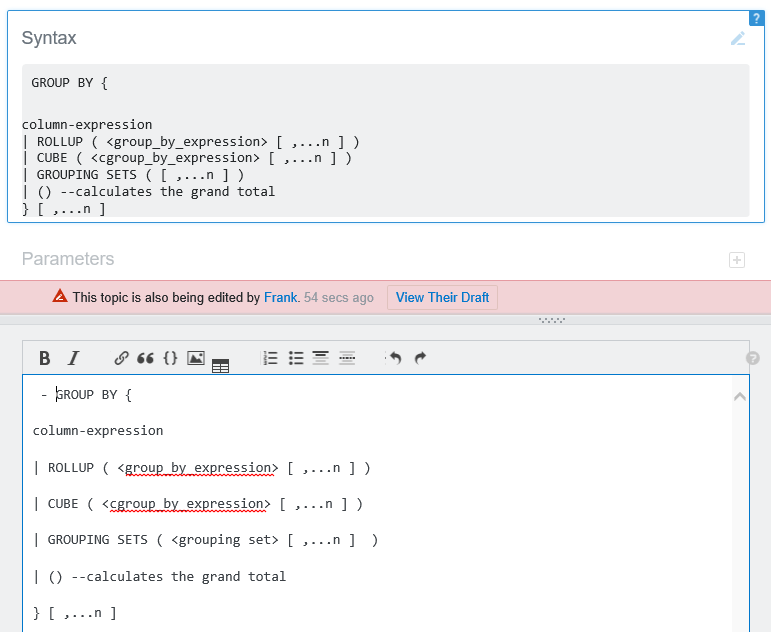 And if I try to remove the empty line, it puts the second line back onto the end of the first line: 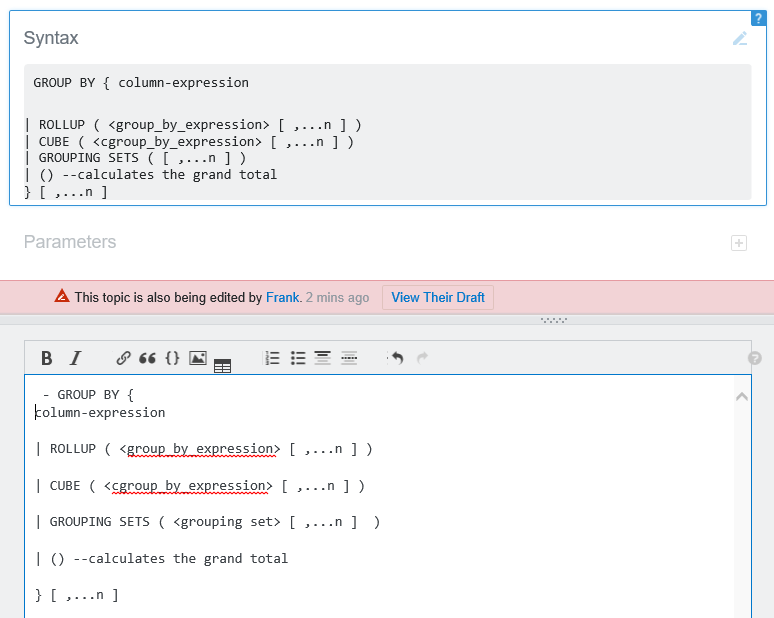 So I don't see a way to cleanly present multi-line syntax definitions, let alone include indenting as well.

As suggested by Frank, you can get the preview to look exactly as you wish by using a double space at the end of each line and a number of &nbsp; to indent: 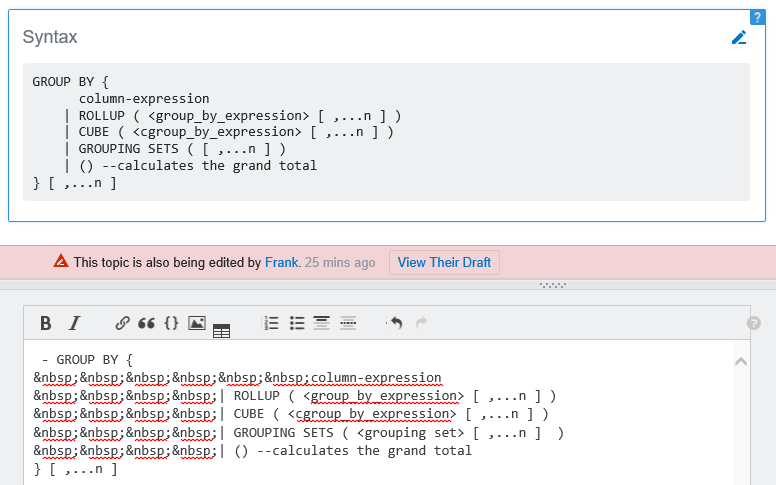 However, once again this will not submit due to the Syntax must be formatted as a list of one-liners warning.

I tried exactly as Frank suggested, with just a single &nbsp; on each line I wanted to indent (even though this is not the exact formatting I'd like), but this also would not submit: 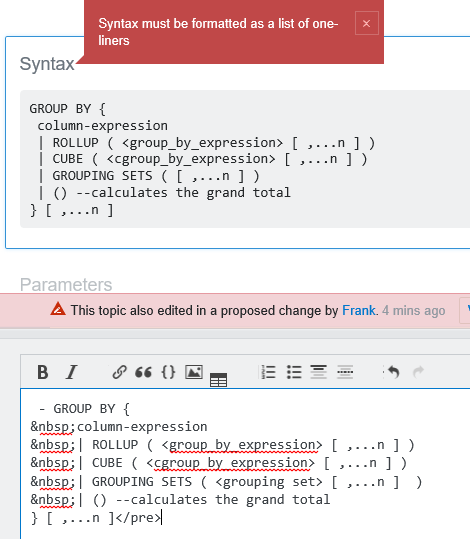 I've also tried using <pre> and this seems to add an unwanted blank line which I cannot get rid of: 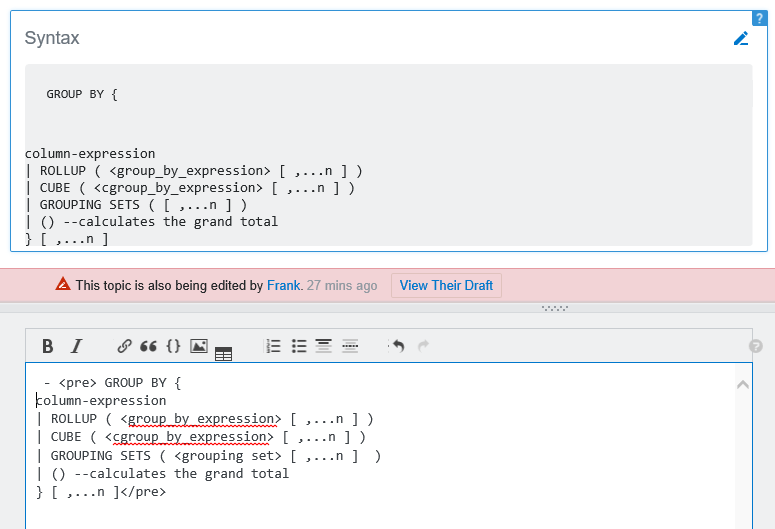 Then I thought I'd cracked it, as adding four spaces to the start of each subsequent line (like when adding a code block in a normal Q or A post) seemed to do the trick: 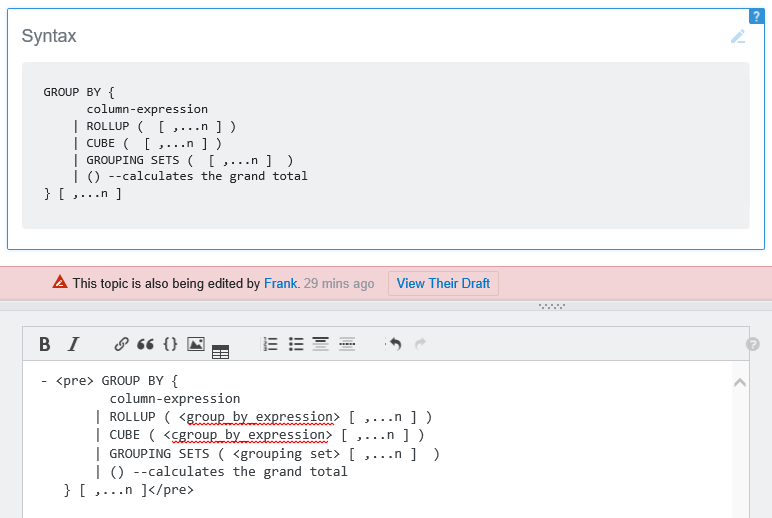 However, this also will not submit due to the Syntax must be formatted as a list of one-liners warning.

Here's one way to get the indenting (submitted as an actual edit, since I wasn't sure where else to test):

There are two trailing spaces at the end of every non-terminal line; and a &nbsp; at the start of every line that needs indentation.

I had the same question as the OP. We heard more from Jon Ericson in chat:

[T]he idea is that you'll use it to cover trivial variations that don't belong in a full example. [...] I think of the Syntax section as something like the Synopsis section of a man page:

This makes it somewhat analogous to / redundant with the Remarks section.

Not the answer you're looking for? Browse other questions tagged support documentation syntax-section .