So far I've flagged dozens of link-only answers with a 100% approve rate.

Couple of days back I clicked to flag one such answer just to find out that I've already flagged it a week ago and it was declined:

declined - Using standard flags helps us prioritize problems and resolve them faster. Please familiarize yourself with the list of standard flags: see What is Flagging?

Fair enough, I followed the link and read through, but I did not find any standard flag about link-only answers. And it goes without saying, if there was such an option to begin with I'd have used it. None of the available options are IMO accurate - it was not "not an answer" and it was not "very low quality", it certainly wasn't too "rude or abusive", and it wasn't spam either, it was simply a link-only answer, leaving me with the last option, which is "in need of moderator intervention" and although I admit that sounds a little drastic, it is the only option I could select without being overly inaccurate with the flag, for "A problem not listed above (that requires action by a moderator. Be specific and detailed!"), which again sounds a little drastic, but there was no "A problem not listed above that doesn't require the precious time of a moderator who would rather decline accurate flags and waste even more on giving me pointless advises instead" option. 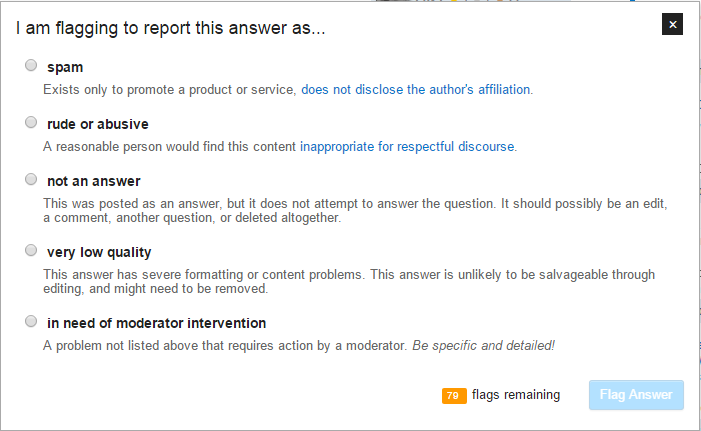 But what was more striking is that the flag was declined not because it wasn't accurate, but because someone felt like it wasn't worthy of the time he volunteered to maintain the community. In fact the flag was very much accurate, not only is it obviously a link-only answer, but the author even explicitly admits to that as well as his unwillingness to do better.

So I flagged it again, just to have it declined again, encouraging me once again to familiarize myself with the non-existent standard flag for link only answers. And yet now I see that the answer was actually converted to a comment following the second declined flag, so if the flag led to an action, why was it declined.

Should a moderator decline an accurate flag?

Should a moderator tell me to familiarize with non-existent standard flags?

Should a moderator decline a flag which led to an action nonetheless?

And lastly, can we have a standard flag for link-only answers?

15
Link only flag got declined for answer: "Here is a rather descriptive starting point."
26
Link-Only Answer Flag Declined
7
Why were these NAA flags declined for content-less link-only answers?
8
Flagging system is unclear when it comes to link-only answers
13
Why was my flag about an old question that had become useless due to a broken link declined?
13
Guidance for when to moderator flag vs raise many standard flags