I noticed while skimming the documentation pages that my favourite programming language isn't in Title Case, like the other pages:

This is relatively easy to fix for a single page, but difficult if there are a few dozen out there.

Upon looking at some of the topics underneath it, the same issue persists on a scale that is far too large to be solved by anything short than an army of mods, and that would never truly be fixed: 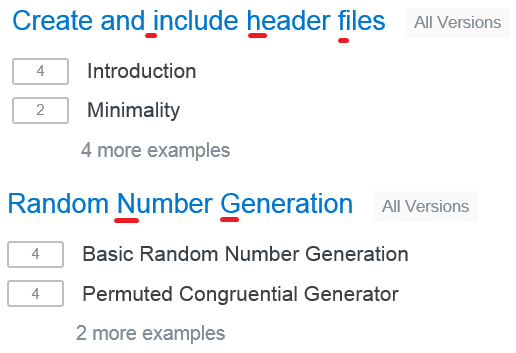 Could it be a good idea, for neatness, consistency, and good formatting's sake, that all such titles are automatically converted to Title Case?

Of course, there would be exceptions that are not affected, such as:

Alternately, there could simply be a warning notification when a title is typed that is not in Title Case.

I think this idea poses a few concerns that would make it a bad change to implement.

First, it's unexpected. Users will not necessarily understand what is happening, and requiring users to override it or opt out makes it that much harder to add or edit content.

Second, there are too many exceptions. In addition to all the exceptions you have already identified, there are many others. For example, what about words that are in the English language, but have special meaning or are case-sensitive, like bash, float, include, print, string, etc., depending on the technology in question? Making this automated means either (1) accepting a super-high false-positive rate or (2) an incredible amount of work for the developers to handle all the edge cases.

Third, and most importantly, we don't really need it. You wrote,

Upon looking at some of the topics underneath it, the same issue persists on a scale that is far too large to be solved by anything short than an army of mods, and that would never truly be fixed.

We have an army of people who can make or at least suggest edits: literally every user of the site. If something is bad enough to require correction, then users can fix it or, when necessary, flag it for moderator attention. That system works just fine for things like spelling, capitalization, and punctuation in the Q&As. There's no reason to implement a special system just for Documentation.

Not the answer you're looking for? Browse other questions tagged feature-request documentation title .

5
How to change title on entry Documentation page?