How to persuade someone into leaving constructive comments, or none at all?

Just the other day I stumbled upon a question that wasn't really answerable in its current form, and the (close-)voting on it indicated that. Some people left some constructive questions in comments as well on why the question was unclear and what could be improved.

I have so many questions about your question I don't even know where to start.

Yes, very funny and very snarky, but not constructive at all. A comment pointing out that a question is bad, must contain pointers to improve the question, or not be posted at all, according to Be Nice.:

If you don't have time to say something politely, just leave it for someone who does.

To me, it was obvious that that comment was neither polite, nor constructive, nor asking for any kind of clarification. Saying "I have so many questions" does not tell the OP what part of their question is unclear, and only adds insult to injury. Perhaps the commenter doesn't speak English very well, or they don't know how to work with the tagged language, making it their very own problem and not the OP's.

So I asked that user, in the same comment chain:

Which unleashed an upvoted shitstorm in comments against me that now I was the one not being constructive.

So: how can I enlighten a user that they may not be as constructive or funny as they think they are?

"How can I enlighten a user that they may not be as constructive or funny as they think they are?"

That's not your responsibility.

Flag the comment and move on. If the user is repeatedly flagged for comments like these, moderators will notice and have a little chat with said user.

You can flag comments as non-constructive. Don't try and tell the commentor that they aren't being helpful. 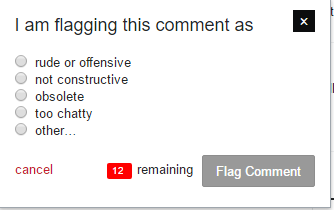 If you can leave constructive comments yourself then do so, otherwise flag and move on.