The lowest possible value is now 50K. There are countries (like the Netherlands) where this is very high (for comparison: I'm on the high end of middle class and I make <30k a year pre-tax). There should at least be options for 40k 30k and 20k, maybe even 15k.

We're working on an update that'll allow you input a custom value. This is going through QA now, but you should see it live soon.

Thanks all for the feedback!

A competitor (in the UK) that only advertised IT jobs starts at £10K (seems a little low to me, I'm not even sure this meets minium wage requirments?) 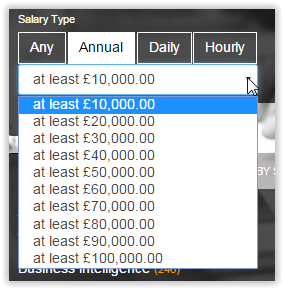 I'd say this should be moved to £/$/€20K as a minimum. Unless you only plan on advertising mid-to-high end jobs?

Outside of London (which is a special case) I'd be surprised to see anything but a very senior job over £50K. Basically as it stands this filter is unusable for me.

I've just done some experimentation for a blank UK search there are 1,877 jobs (BTW this isn't very many, a close IT compeitor in this country reckons it has 9,700 current jobs):

So 87% of the UK jobs fall outside of the minimum wage of the filter!

I disagree. The job market for developers in the Netherlands has been improving, so these 2014 figures are outdated. Still, we see that about 55% of respondents makes over 40K.

That study is likely biased towards younger developers, given its source. This is reinforced by reports of below-minimum wage incomes, which implies internships.

But even if the figures were real, it's questionable whether we even want companies who pay (significantly) below market. If a Dutch company can't afford to pay 50K+benefits, StackOverflow might not be the right place to look for new employees.

[edit] It seems that there's some disagreement about this. The Dutch labor market for developers is highly favorable to them - demand is quite high, supply is low. Sure, there are quite a few companies who are unhappy with this, and would prefer to pay less. That is why they're advertising! They've got open positions precisely because they lose developers to better-paying companies. The current advertisers are not a representative sample.

16
What questions should be deleted?
185
What's up with China?
1
Should we exclude extremely underpaying ads from Jobs?
20
Survey 2018 feedback