So when I try to change tags, it's suddenly decided that bootstrap is not allowed.

Why is it not allowed? And why was it allowed to be migrated. 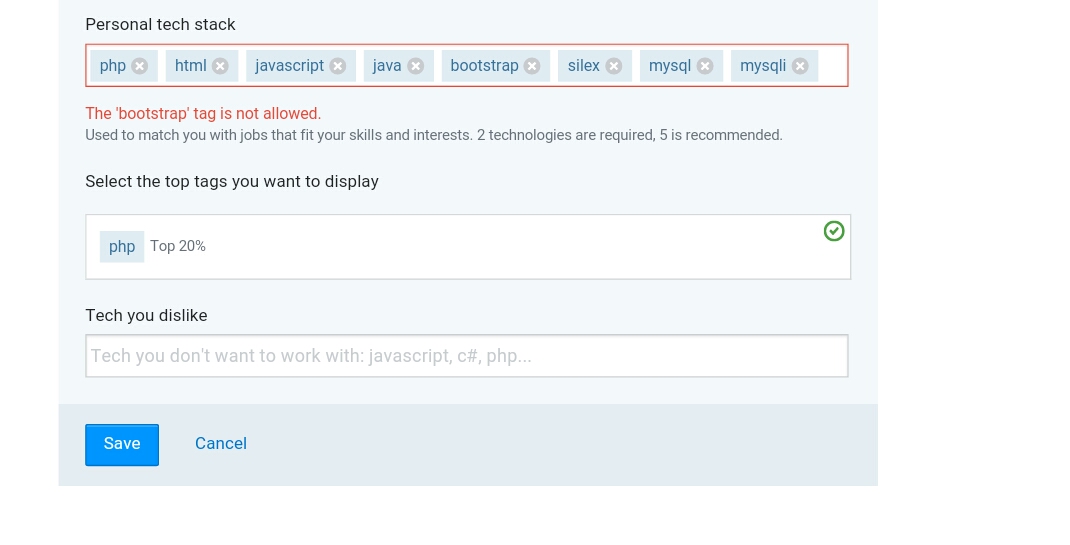 To directly answer your question:

The tag is blacklisted because it is ambiguous among several very different things. Note that this is a full-out block of using the tag, whereas we do allow tags that simply have warnings attached to them to be used on the developer story.

The tag was migrated because it's better to just migrate everything and then tell the user something that used to be allowed no longer is, rather than just removing it and the user has no idea that one of their tags disappeared. You'd get the same experience if you used a tag at some point in the past, then the tag got blacklisted, and then you tried to edit your tags again.

I'm not sure this makes sense in this area. Tags are blacklisted from Q&A because they suck as tags for questions, but could be legitimate useful tags on a CV. For example, I dislike pretty much all Apple products, just as some people might dislike all Microsoft products. So I might just put "apple" as a tech I dislike (I'm not gonna lie, I did, a long time ago). Seems like a legitimate thing to put there, even though "apple" as a tag in the Q&A context is a horrible and unspecific tag, and is in the process of being burned itself, it represents a group of techs that I dislike on my CV. Similarly, the "microsoft" tag has already been burned and blacklisted, and thus isn't allowed to be entered into a story.

I don't think the Q&A blacklist is a good source for banning tags in the developer story, and I don't think any sane person is going to be putting things like "homework" in their tech list in the first place.

61
We gave [bootstrap] the boot, but it wasn't heavy enough!