Don't show closed, downvoted questions in the "Questions that may already have your answer" list 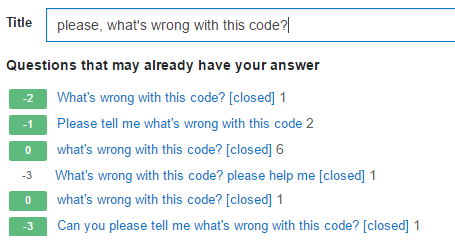 8
What algorithm determines whether "similar titles have frequently been downvoted and/or closed"?
50
Can a "noindex" be added to questions that are closed without answers?
25
"Similar questions" recommendation algorithm: is it open-source?
-4
Why is my question flagged as "Questions with similar titles get downvoted...Be more accurate"?
13
Performance of the "Questions that may already have your answer"
2
Referrer search keyword statistics in edit reviews
-60
Why did they ban me from asking questions for asking a poor question when I copied a question exactly that was asked at least four other times?

59
Enough fuzzying: let's let everything into the close queue and age out questions that don't reach a threshold
43
Why isn't this obvious duplicate offered when asking the question
34
Is the "Questions that may already have your answer" search available elsewhere?
7
Remove answer upvotes on questions which are promptly closed as unclear