In the last week I've done a lot of reviews. I have passed many audits and haven't failed single one. I just wanted to come back to reviewing and it occurred I got banned for a week.

I guess it's a ban from Flexo who has reviewed the post after me. I agree that flagging as unclear what's you're asking would be a better decision, but I had a thought that as the question was just posted and had just 2 views at the moment he'll add the code and it'll get clear. OK, after two hours from posting I agree that it is unclear indeed.

I have made some research on my reviews and this is what I have: 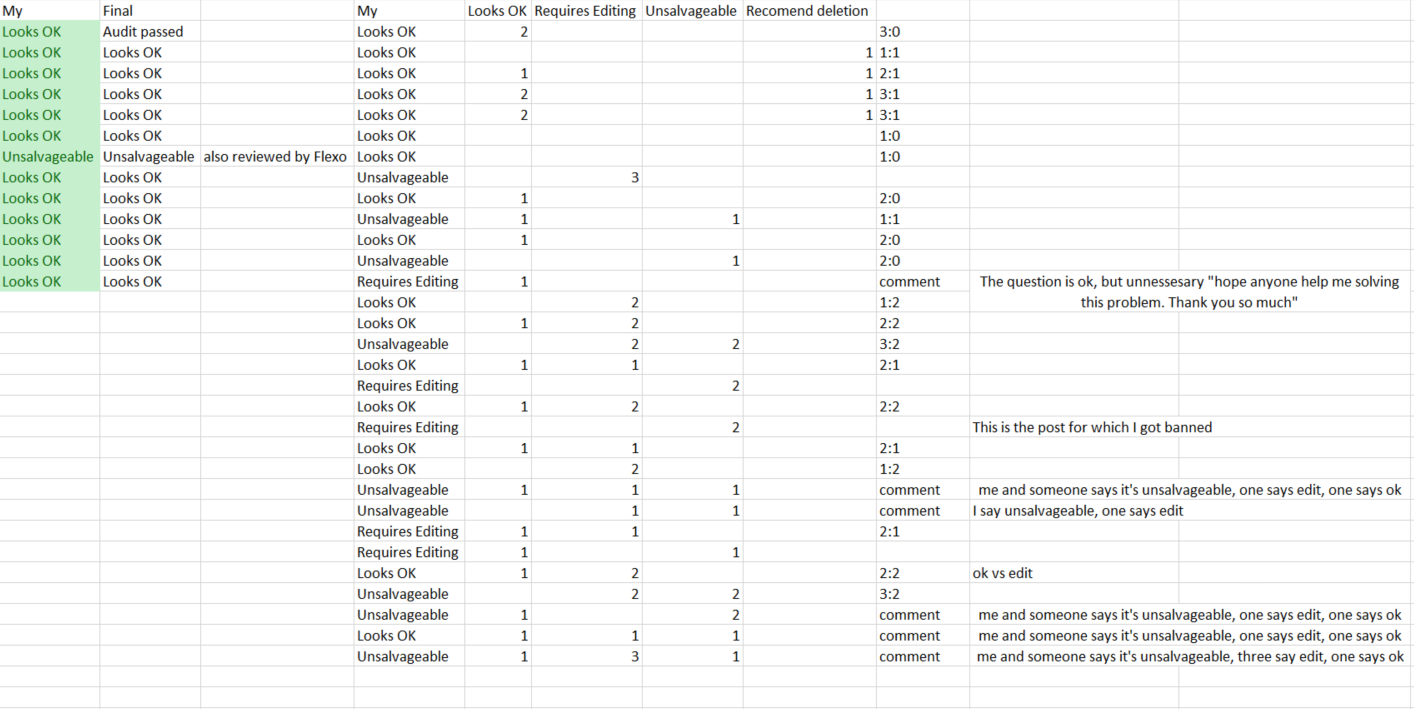 All my reviews that are on posts on which the review has been finished so far are good. There are some reviews on which I differ from the majority:

In the rest of reviews I'm with the majority or drawing on 'controversial' posts. Is it ok to ban for a week for just one bad review which would be overridden by other reviewers?

Flexo, did I get banned for this single review or did you inspect any further? For example, did you see that I have 628 helpful flags and 24 declined? I'm trying to make this site a better place in revenge for lots of help I got from the Stack Overflow Community in the past.

Does it count as an audit fail so a single audit fail will lead to a monthly ban when the current one ends?

I applied a ban manually, in this instance because I couldn't quite believe that it would possible to consider this anything but textbook unsalvageable. My thoughts on "requires editing" vs "unsalvageable" are already well documented. The only thing I'll emphasise again here is that the OP had all the time in the world to add code (or heck even any kind of indication of what they were on about other than 'nav'). In terms of duration of the ban I did look at your recent ban history and this didn't seem any better than the audits you had failed.

At best incorrectly reviewing that post wastes time of people in the Help and Improvement queue. At worst it lets it fall through the cracks and the OP takes longer and more time from others to reach the conclusion of the Q-ban trajectory they (rightly) seemed to be on.

You commented about the low view count and recently posted with an implication that you were offering "grace time" to the OP. If the system wanted you to give questions with low views that were recently posted extra grace time then it simply wouldn't show you the question until that grace time had expired. The fact that you're shown this question in /review is a request for you to make an accurate assessment of it as it exists right here and right now. The outcome of which will determine how to treat the question. (And in the event that it did get closed and the OP did want to fix it their edit would automatically give it a chance to be reviewed for "unholding"/reopening).

There's a grey patch of questions when reviewing, in the middle of the spectrum from great to awful which I agree is hard to review and will always be contentious. I stay far away from those when looking at the review queue and this question was anything but contentious, hence my actions.

Moderators will sometimes issue manual review bans when they deem it necessary.

Looking at the post you identified that Flexo disagreed with you on; it's very clear that that is a long, long, long shot from "Looks OK". In fact, it's almost a textbook example of a closeable question - you could close it for at least three different reasons.

What happened in this case is most likely that a moderator (it turns out it was Flexo; see his answer below) has seen this one egregious mistake of yours in review, and then went on to check a few more of your reviewed posts, concluding that you need a time out to refine your reviewing skills before continuing.

Not the answer you're looking for? Browse other questions tagged discussion support review-suspension .

90
How long should we wait for a poster to clarify a question before closing?
-1
Why did I get suspended from reviewing for 7 days instead of 2 without any explanation?
19
I was blocked from reviewing: How are questions marked as spam on Stack Overflow?
23
Why could reviewing questions with unobvious belonging be a reason for banning from review?
2
Review Suspension - Contradictory Recommendation

2
Review Audit dispute
69
Dispute custom review ban
20
Is there now a two-month review ban period?
11
Do I get a notification for a review ban?