Why is the quality of PHP questions, on Stack Overflow, in decline?

I've been on Stack Overflow since 2012 and have seen a fairly steady decline in the quality of questions asked in the php tag over the years. However, I noticed a significant incline in the sheer volume of these questions in the last couple of years.

A lot of the very low-quality questions stem from every-day problems like syntax/parse errors, why isn't this code working PEBKACs, and other poorly-researched questions that could have been better answered by a quick Google search or just spending a little more time playing with the code, or even just searching Stack Overflow for similar questions that provided useful answers.

Sometimes even closing a question as duplicate led the OP to re-ask the same question with "this did not answer my question" in the title/body, when the duplicate clearly did. It seems that if the answer is not specifically tailored to their use-case/code, a general answer is unacceptable from their point-of-view.

I developed a theory that the majority of these questions come from students or hobbyists that have been misguided, to believe that Stack Overflow is a general help forum, where anyone can ask for and get some quick help with their code.

So I decided to head over to SEDE to see if there was any data to support my theory. Sure enough, I dug some interesting data, but I'm still not quite sure what to make of it yet.

Looking at a histogram of when php questions are asked, it seems that historically, the peak hours are usually between 8 AM and 4 PM UTC. 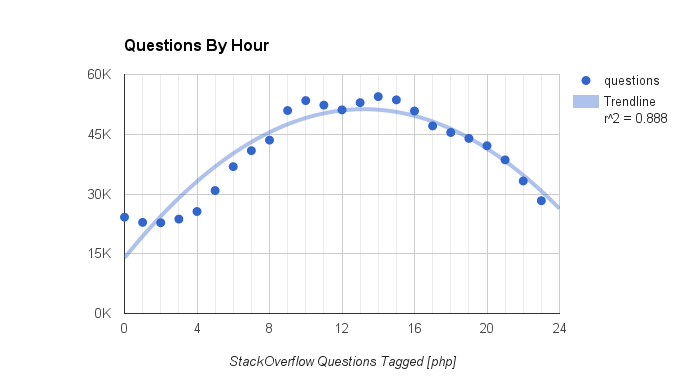 So far it seems that, generally, day-light hours bring in the most php questions, which if we go by the theory that the bulk of these questions come from students spending their days looking for help with their projects/homework, it might make sense. 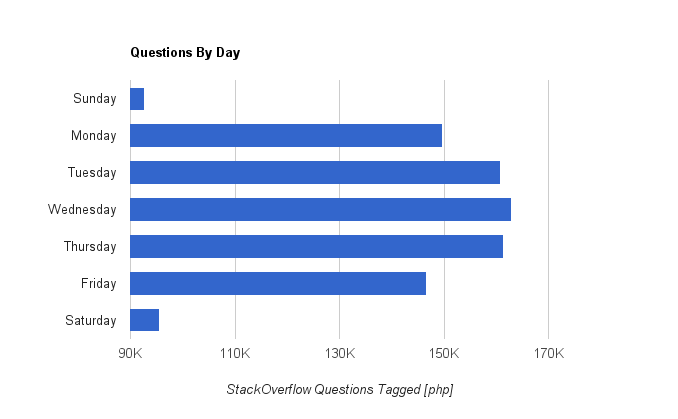 Looking at a histogram of php questions by days of the week supports this notion even further. There're almost twice as many questions asked during week days as there are during weekends. 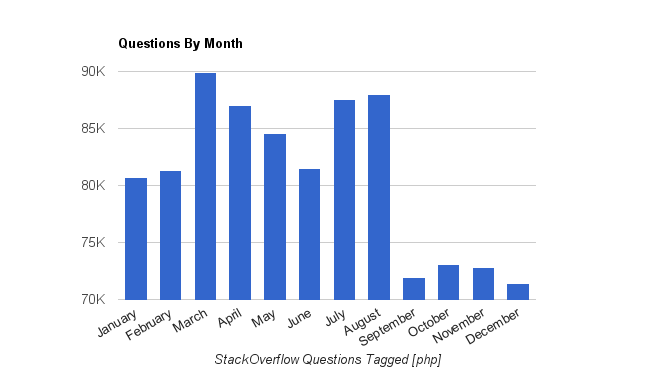 Looking at a histogram of php questions by month further supports this theory as you can spot a significant ~20% drop, historically, during the start of the school year, and 5-10% upticks during holidays and summer months.

Looking at the data by year, you can clearly see that question scores are tending downwards, while the amount of questions are trending upwards very quickly.

In 2011, the amount of questions asked that were tagged php, nearly doubled from the previous year in 2010. By 2012 we can see that aggregate question scores start to suffer and trend downwards as the amount posted questions rise and trend upwards. 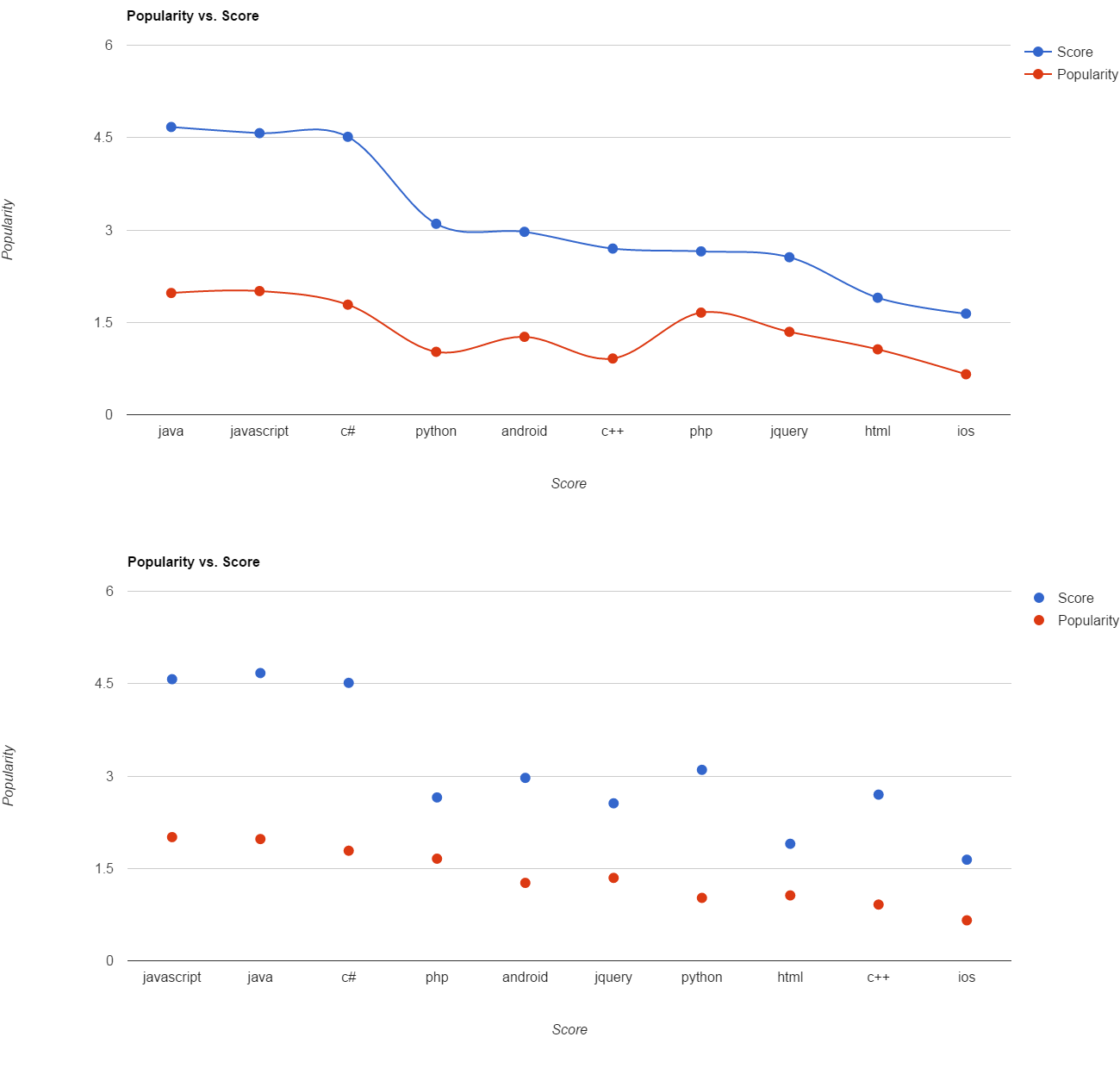 Even though php is the 4th most popular tag on Stack Overflow, it's oddly the 7th highest scoring tag out of the top 10, lagging way behind less popular tags like python, android, and c++. Which leads me to believe that the quality of scores that the php tag suffers from must be the result of a lack of precedence.

Most people tag their questions as php just because PHP is involved in virtually every aspect of their stack in their web development process. So while the question might really be about JavaScript or Apache httpd, or even just HTML/CSS, the fact that PHP is somehow involved means the question likely gets tagged under php as well. Meaning that PHP tagged questions share in a lot of cumulative blame as well.

If it's not the result of masses being misled to believe that they can turn to Stack Overflow whenever they run into a problem with their PHP code, then what is it? What can be done to improve the overall quality of the PHP tag score on Stack Overflow?

Should I even care? Is this really a sign of a bad trend in the works that's detrimental to the PHP ecosystem on Stack Overflow or just typical behavior that's to be expected as the site grows?

I'm including the monthly standard deviations scatter chart based on further discussion in the comments to see if there is any more meaningful data there that contradicts or strengthens my theory. It's come to my attention that the histogram of question distribution by month may not be as meaningful as it is presented to be. 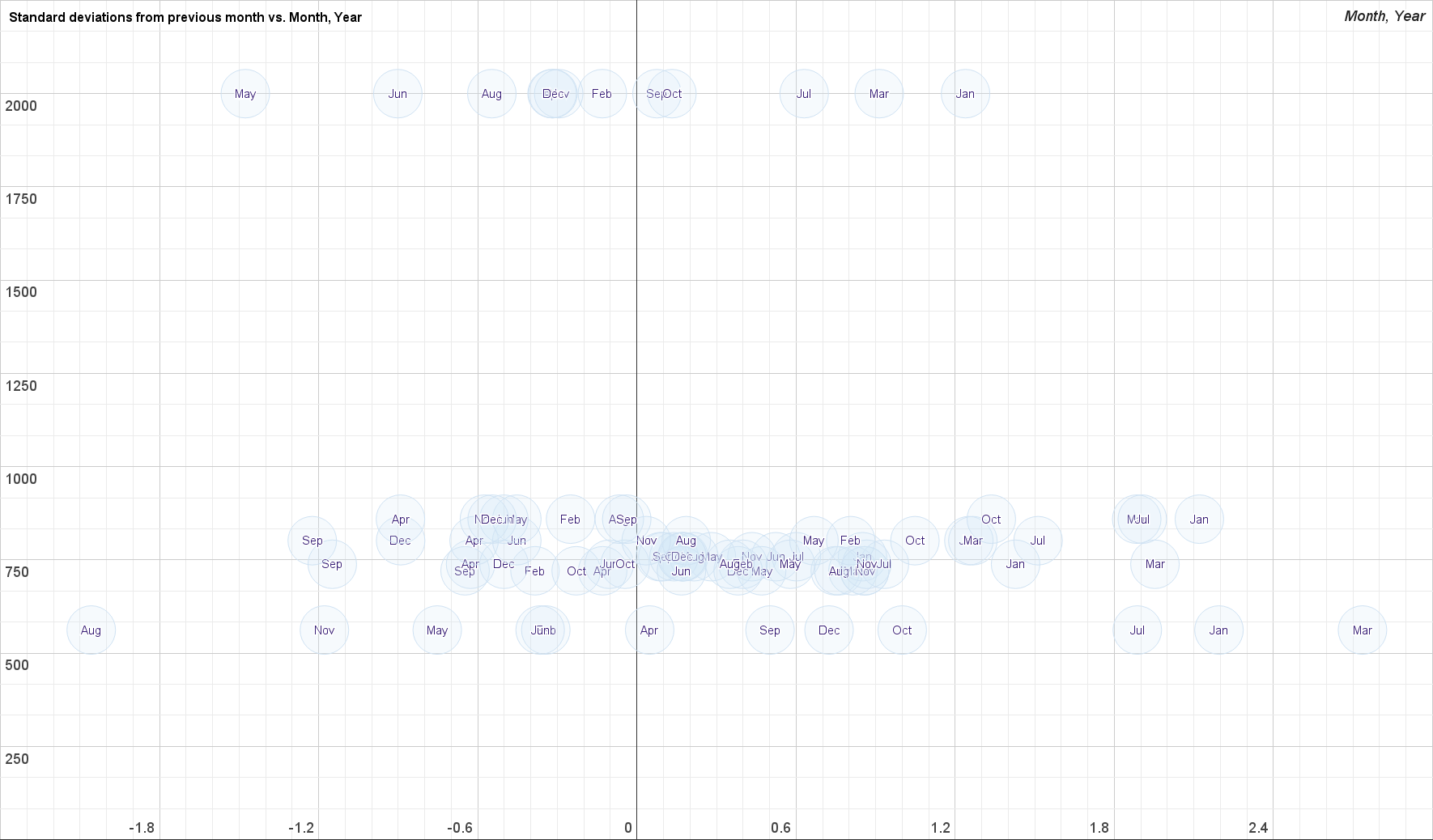 Here's a gist with the CSV dump of the data in the chart.

The variance is then calculated by the following function.

So far this shows there are some months that tend to be further from the standard deviation then others, but not consistently enough. There's probably some math error in my calculations here that I'm not aware of... So please do feel free to point out where I might have gone wrong.

I'm by no means a data scientist or have any advanced mathematical skills beyond the average Joe. So constructive criticism is both valued and welcomed.

There comes a point where a resource like php has reached the full breadth of what it can cover within the constraints of what Stack Overflow considers to be on topic. What remains is a lot of noise throwing itself at the wall, with a tiny bit of signal occasionally emerging and bringing more depth to the resource. This problem isn't at all surprising, and I'm not even certain that the cause itself is problematic - any encyclopedic resource should have completeness as a big part of its definition of success.

What remains is what to do with that extremely irritating cloud of noise from which a tiny bit more signal occasionally emerges. That's something that we're going to be spending a significant amount of time studying and building around as we kick off the second iteration of the Stack Exchange quality project (highlights from the last one on MSE and MSO, though there's more that unfortunately wasn't tagged as such). This project is perennial, it doesn't really end, we just take a look at the impact of major efforts every 1.5 or so years and then start planning new ones.

Since I'm about to get a little windy, here's a tl;dr; of the first things we hope to focus on:

All of this is still in planning and subject to change. But I wanted to put it out there now so folks know we're working on it. Now, here comes the wind:

Sometime later this week, I'm going to be announcing a special collaboration effort with the University Of Melbourne. A graduate project focused on fast analysis of questions in order to determine not only if they're duplicates, but quickly determine the best duplicate given the context of what's being asked. Interestingly, and unsurprisingly, the method also requires very quickly being able to determine if something isn't a duplicate.

They've gone as far as being able to validate their model through human analysis of many non-academic questions, but the expertise of our math, science and programming communities is needed in order to vet the rest of the data. They'll be going to 15 or so individual meta sites and providing a link to a tool where users with close privileges can say if any given questions are duplicates, similar but not duplicates, or in no way duplicate each other. This will help to validate the method, and we'll see what we can learn from it.

Even if we don't get the validation of the data that we expect, we're going to have learned a heck of a lot and we'll have many sets of data that have been human reviewed that can be used to test other models.

If things look promising, we'll then run Stack Overflow data through it, and open it up for validation. We do not want to do that initially because it essentially means analyzing every single question asked since the dawn of the site and putting folks to a pretty big task. While there's some value in doing it just to have the sets, we'd like a bit more confidence before investing that much time.

Later this week, or early next, I'll be posting something on Meta Stack Exchange to let folks know when the project is going to kick off, how they can help, what kinds of ideas we're looking to add, and what's in scope to get things started. There's some big stuff, but the majority of it is lots and lots of small things that could make a pretty big difference.

I'm sorry, but my answer will definitely NOT be as high quality as the question is.

The trend you are noticing is not limited to PHP tag alone. Other tags suffer the same and the change in quality affects both the questions and the answers.

There are multiple reasons for that, here's a few:

Not the answer you're looking for? Browse other questions tagged discussion data-explorer .

-26
Why we see so many downvotes on questions?
159
How to lure professionals to Stack Overflow?
193
Off topic questions have to be cleared out of the way, but NOT via closure
231
Allow users to optionally filter out low-quality questions
125
Should trivial re-occurring questions really be answered?
91
Feedback requested: New "recommended" homepage, phase 1
64
Where are the non-trivial PHP-questions lately?
22
Is the overall quality of questions declining?
28
Homework statistics
-20
Majority of PHP questions downvoted or dupes
See more linked questions

71
Why are answer rates dropping?
28
Homework statistics
5
What is the correct use of php-mysqlidb tag?