To go more into this, I think that saying other people can significantly improve documentation is true, but not fair to the original poster. What if it is originally very good? Documentation should operate off of similar principles as those of the main site.

If you were able to flag examples as very low quality or for deletion, and then write your own example to replace it, that would be clearer than fixing a terrible example or even a mediocre one. The other point of view is like saying that one should edit a terrible answer to make it wonderful instead of posting your own. (Maybe an "obsolete" flag should be added so when a better example comes up, the old one can be deleted?) Edits have their place, but at some point it is better to post your own answer.

Of course, there does have to be a line somewhere, though I don't know how that should be drawn. I guess I would say that if an answer is low-quality, terrible, awful, then it is okay to write your own answer. If it is mediocre or better, then it is not okay, and maybe there would be a way to flag that as well.

Also in this vein, the number of characters is, I think, a subjective way to do it. I get edits will be reviewed, but there is always the possibility of junk somehow getting in if it looks good enough. Besides, good edits could add images, or delete unnecessary bits, or split up an example, and this is not recognized by the current system. I understand that rewarding deletion could, um, end up badly, but that is unfair to the people who do it for a good reason. Besides, isn't that what the review queues are for (though, of course, there are always exceptions).

I would also suggest that if a rollback occurs, the editor(s) whose edit was effectively deleted by the rollback should be removed from the reputation cycle. Of course, if the rollback is rolled back (geesh) that would cancel.

I do not have a good suggestion for replacements, but I'm bringing these up as things to consider. Thanks, and again, any feedback is appreciated. If something is not clear, I'd be glad to clarify. I will be adding any ideas I think of, but these are the main ones. I love the idea of documentation, and props to everyone who is working on it, whether a user or part of the team. Thanks for your hard work!

Note: I originally posted this here, but a user suggested I post it in its own question so it gets more attention/feedback. I'd appreciate any feedback.

This is in response to Nicol Bolas' answer.

Yes. That is very true. But (looking back on this, I didn't make this clear, and I apologize) I am suggesting this not because of ownership for the original poster, but because I think anyone who makes a significant improvement to the documentation (such as creating it outright) should get more reputation points, and I believe the assigning of reputation points to edits is flawed for the reasons I explain up above.

These reasons include not allowing for deletion, short edits that significantly improve the post, and it just being generally arbitrary in my mind.

This might be terrible, if so, just let me know. However, what if, once the review queue is set up, not only do items get reviewed/rejected, but "importance" is rated, say, on a scale of 1 to 5 (where 1 is somewhat helpful/minor and 5 is extremely helpful; non-helpful things are not on this list as these would be outright rejected). Reputation for the edit is calculated based on this rating, perhaps 10 rep/upvote for the top helpfulness rating and 1 rep/upvote for the lowest helpfulness rating (or maybe even 0 for that rating, I don't know). Since there would be multiple people approving, the rating would get the same cross-checking.

I think it should be 10 rep for upvotes for the original poster and the editors get rep as described.

This idea requires attaching ownership to an example. That the OP of an example somehow has primacy over it.

First, let's have a bit of clarification regarding how reputation currently interacts with Documentation...

There are currently three ways to earn reputation via Documentation:

Right now, most of the reputation being earned in Docs is coming from #1 and #2, with #2 being by far the leader. However, this is probably an anomaly - as with all new systems, there was a huge stampede of interest at the very start, resulting in the creation of a tremendous number of examples and an even larger number of votes. Because it was new, and this was something new folks could do. I don't expect most of those votes actually meant much; I'm especially skeptical of the idea that most of them indicate anything approaching helpfulness in terms of solving a problem - for example, I highly doubt there was that much pent-up confusion over how Java Arrays worked.

This idea of temporary exuberance is born out by the data: 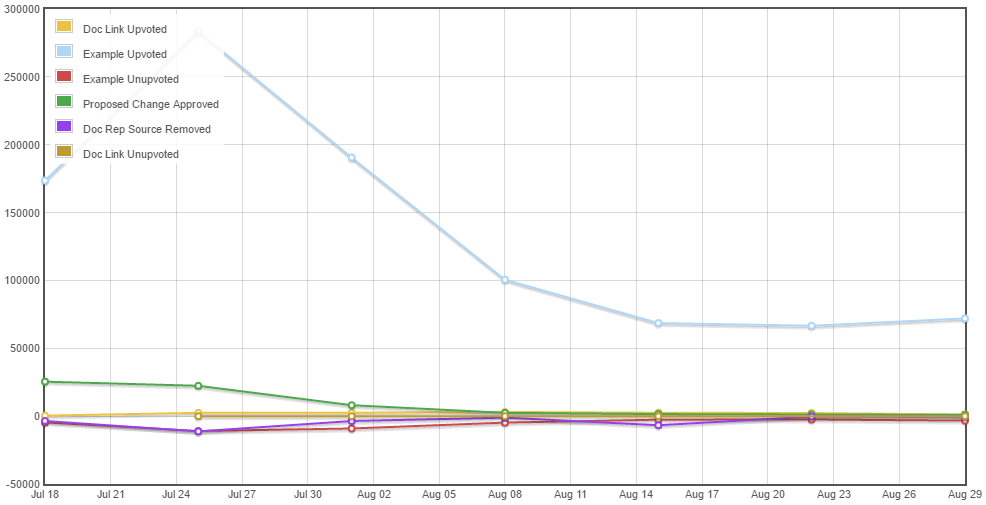 Reputation being earned from voting dropped substantially from its peak before leveling out; a raw count of votes per week follows roughly the same trend. So for now, let's consider this a very weak signal that may, over a long period of time, become somewhat stronger. So far, this is actually pretty close to how Q&A works...

Thus far, this source of reputation has been kind of a slow burn - in the graph above, it fluctuates between 1 and 3 thousand points per week, dwarfed by the tens of thousands of reputation from votes. I would tend to expect this to continue for... A good while. Because writing useful documentation is hard, and finding useful documentation is even harder.

So what you have now is a system that in theory lets useful writing double-dip: earn rep up-front for votes that are mostly based around the notion that an example might be useful, earn rep later on as folks writing answers actually find it useful, then maybe earn rep again as the folks reading those answers follow the links and vote on your examples. Plus it applies these rules to everyone who contributes more than a trivial amount of content.

In practice, we're far short of this scenario right now: most of what's been written hasn't been proven useful thus far. And that's ok; I'd prefer if it was a little bit harder to earn reputation in Docs until we've had some time to hash out some of the disagreements, as long as in the long-term your productive effort is rewarded.