With the advent of the VLQ review queue, I've come across on several occasions where I've marked a post as "Not an Answer", and the original poster or one of the reviewers made an edit to the post, but didn't change anything that would make it an answer. In these circumstances, the flag changes to "helpful", and it's immediately removed from the queue.

Right now, the flagging screen currently looks like this: 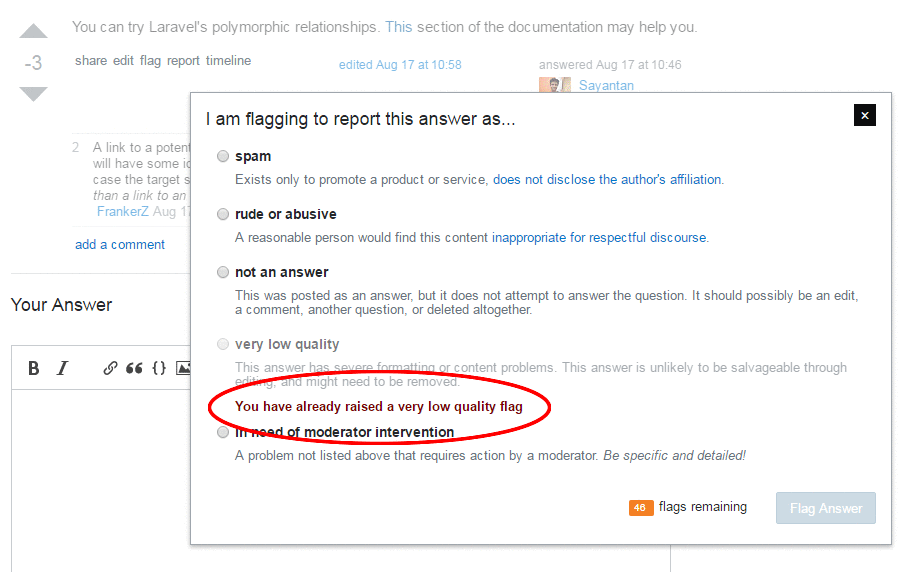 In this example, I marked it as VLQ, and the poster simply changed the link format around. It's still considered VLQ, and I can't mark it as such. It is an answer though, and I would receive a 'declined' flag, if I tried to submit it as a "Not an Answer", and a moderator reviewed the post.

The current course of action (For some of us in the SOCVR community), is to post to others to reflag the question so it goes back into the queue to get a second review. This is not needed, if we have the ability to reflag it, to indicate to the reviewers/mods that the post is still considered "Not an Answer" or "Very Low Quality".

My recommendation: Allow flags that were marked helpful, to be reflagged.

For further discussion, this was brought up in a few places, and I thought it should be worth a mention

Every additional rule we add to flagging results in a system that's harder to explain, harder to understand, harder to fix (harder to even realize when it's broken) and in some cases harder to use.

Let's take a step back here...

Flagging as a patch for insufficient permissions

The guiding principle behind the original design of Stack Overflow was that everyone was a potential moderator. See a problem? Fix it! Your participation earns you an increasingly powerful set of tools to do so, starting on day one with the ability to write competing questions and answers, soon augmented with the ability to up- and then down-mod posts, graduating into full editing rights on every post and eventually maturing into the ability to delete other's posts.

Given enough time and the will to do it, there are essentially no problems that cannot be handled directly by individual members of the site working together. This dramatically lowers the cost of moderating a site this size, by spreading the work out over thousands and thousands of individuals.

The only thing it requires... Is trust.

And that's where we started getting into trouble back about 6 years ago. The untrusted people flooding into the site vastly outnumbered those who had earned the ability to moderate. There was no guarantee that the folks looking at a given post would be able to fix it, or even know how. So flags were created as a way to escalate issues from the people who had no privileges to those who had some or all of them. Can't vote to delete? Don't know how to edit? Haven't earned downvoting privileges yet? No problem - flag it & someone will take a look.

One step forward, two steps back

Flagging presents its own set of problems. Things like spam and overt trolling have been around (and had associated flags) from the very beginning... But those are relatively uncommon problems, and in most cases were easily handled by groups of flaggers. Some simple rules enabled them to work without moderator involvement in a majority of cases: 6 flags delete and lock the post, flags age away after a couple days if a quorum wasn't reached, and rollbacks eliminate flags raised on a now-discarded abusive revision immediately.

But "very low quality", "not an answer", "not a real question"... Those are much more subjective, and the solutions are less clear-cut. In theory, most quality issues could be resolved via edits; in practice, editing is labor-intensive and good editors are scarse. As tempted as I've been over the years to status-complete Jon Skeet's old feature request, the truth is that very few people are willing to step up and fix flagged posts; closing or deleting them is by far the most common resolution. Even among the few hardy souls willing to try, it isn't always obvious what can be done to salvage a problematic post. Finally, there's the matter of scale: anyone on the Internet can create a problem, but only a handful here can resolve it.

Training wheels on a 20-speed

The end result of more widespread flagging then has been a concentration of responsibility among those who handle flags: first the tiny group of elected moderators, then the somewhat larger group of volunteers churning through the various /review queues. These hardy souls handle the vast bulk of flags raised on the site, and in some cases also raise a very large number of them... Which creates a profoundly odd situation:

Many users empowered to actually fix problems themselves instead rely on flagging to escalate the problem... To themselves.

If that sounds weird, that's because it is. But that's the situation you're describing in this proposal: you've identified a problem, escalated it to a group of users just like yourself, and - upon not finding it handled to your satisfaction - wish to escalate it again. Discouraged by restrictions placed within the system, you've resorted to calling on other users (most of whom probably share your privilege levels) to escalate it for you... Thus we have a situation where you're asking a group of users who could all just fix the problem to instead collaborate on formally asking a group of people just like themselves, a group of people who might actually end up being the same group, to intervene. 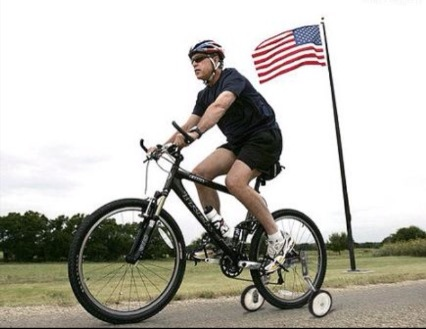 This is... Beginning to look very inefficient.

Put down the flag, pick up the pencil

As implied above, flagging is by far the most efficient initial response to a poor-quality post... At least, short of just downvoting. Hands-down, it's the most effective initial response in cases where you know the common reaction from most mods and reviewers is going to be deletion.

But if you raise enough flags, you're gonna see a few of them handled incorrectly... Or at least, in a way counter to what most folks would consider appropriate. There are all sorts of reasons for this, but editing is far from the most common. A generous estimate puts VLQ flags incorrectly dismissed by edits at under 1% of flags, so we're talking maybe one out of every hundred if those errors are distributed evenly. And at that point, flagging stops being so efficient.

In cases where you absolutely cannot see a way to resolve a situation on your own, Brad's advice is fine. Realistically, the system would almost certainly do exactly the same thing even if you did manage to get another flag raised on the post - at some point, it just isn't sane to keep doing the same thing and hoping for different results, so elected moderators get called in to resolve it. Given there's already been some disagreement over the proper course of action, if your goal is to get the post deleted then it behooves you to explain in detail why you feel this is appropriate.

But you do have another option: just edit the damn thing. In your example, you're flagging a post that's... Pretty light on detail. So, add some details. You don't have to turn it into the perfect answer, just one that an interested reader can understand and make an informed decision on. Will this take you a while? Probably. Certainly a lot longer than flagging it did. On the other hand, you only need to expend this effort once for every hundred answers you encounter (probably less), so it's hardly a crippling burden.

Flagging is a useful tool, when used as a force multiplier, used to increase the productive attention on a post. But don't feel that your hands are tied if a given flag isn't handled in the way you expected; you've earned quite a bit of trust on the site since first you gained the ability to flag - and ignoring those privileges puts you at a disadvantage. Use all the tools at your disposal when seeking to resolve problems here.

If you have flagged a non-answer that should be deleted, and it was marked as being helpful due to a misguided edit, you can use a custom flag and explain what happened and why the answer should be deleted. I should note that moderators already get automatic flags for contested reviews or delete reviews on upvoted posts that mark flags as helpful but don't delete the post.

The reason you are using a "very low quality" or "not an answer" flag is to ask for immediate deletion of a post. You should be able to justify such a deletion in a custom moderator flag, if it is warranted, without having to put something into a second cycle of review.

What you're talking about here is treating a symptom when there might be a deeper problem. I have concerns about how edits can allow non-answers to pass through review, and it might be best to address that at the source. There shouldn't need to be a reason to re-flag something.

There are problems with allowing someone to continually re-flag the same post with the same flag. We see this with comment flags, where people will regularly flag and re-flag the same innocuous comment in order to have it destroyed. They're perhaps hoping to annoy moderators into bending to their will or to spin the wheel to see if they can get someone more to their liking.

Restricting this to only helpful flags would still allow for potential flag-farming or attacks against specific posts by sending them through Low Quality review multiple times. It's probably best to allow a single flag of a default type, then force people to explain themselves in custom flags after that.

Not the answer you're looking for? Browse other questions tagged feature-request status-declined flags .

59
Edits to posts should not immediately remove flagged items from Low Quality Posts review queue
24
Can I raise the same flag after a period of time?

18
Flag marked helpful, but nothing changed
153
Merge the "Not An Answer" and "Very Low Quality" flags into one
3
Edits should not mark Very Low Quality (VLQ) flags as Helpful
23
If a flag is disputed, can we display how other reviewers flagged?
16
NAA flag pending for twenty hours after the post was deleted before being finally marked helpful