On my profile graph at SO, the top number of reputation points seem to be wrong. 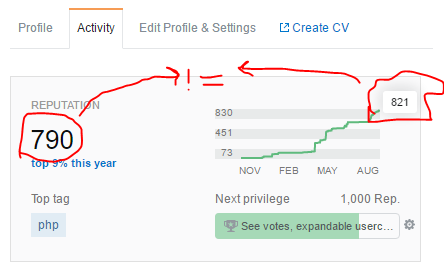 I noticed this issue a few days ago but I waited to create this question because I know there are rep recalculation scripts that run (although I've got no idea if they would correct this issue). So far it has not been corrected and has been at least 2 days.

This seems to be an exact replica of these questions:

The answers for both of these questions says that it has been fixed and 'accounting has been added'. In addition, the number 821 doesn't seem to be moving so maybe once I get to that number it will automatically resolve itself (what an incentive, eh?).

Update: Having gained some rep, the new top number on the graph is 828 so it does look as though it is increasing as my Rep is.

Second Update: I now have 832 Reputation Points. The Graph's top number is listed as 872 which means the delta has increased to 40 unicorn points not the 31 it previously was.