Moving examples to another tag fails (?) with error [closed]

I found these instructions on how to move examples to another tag, but when I tried, I got a strange error:

When I clicked on the Reload link, I got redirected to https://stackoverflow.com/error?aspxerrorpath=/documentation/javascript/503/document-object-model-dom#t=201608031631493624383

And now I get a similar error whenever I try to go to the topic directly, similar to that reported here or this one. It may be that I'm the only one who's getting the error, however.

I have no idea what caused the error you encountered; I went through the steps you outline with two different accounts and was unable to reproduce.

That said, there was definitely some weirdness added to the process by versions; we may have to do something here, since moving examples between tags is likely to be afflicted by this when the versions don't align: 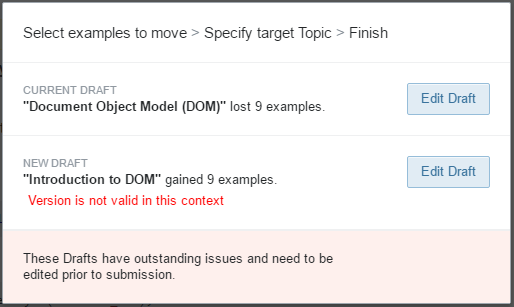 The problem here is two-fold: the ES versions don't exist in the DOM topic, and it's not possible to add them (or otherwise adjust versions such that they validate) in the same draft that moves the examples. The only way around this is to strip the version information entirely, and then re-add it.

Since you ended up with one draft that removes the examples from the source and deletes the topic, I'm guessing that something caused the creation of the second draft to fail.