Ask Question
Asked 5 years, 5 months ago
Active 5 years, 3 months ago
Viewed 853 times
32
Closed. This question is off-topic. It is not currently accepting answers.

I answered a question here and referred to one article I contributed to documentation in the initial days. I got 5 rep as you can see from below screenshots: 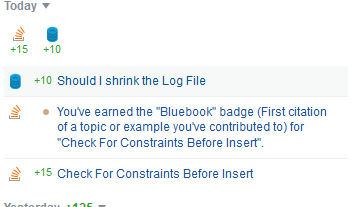 Why do we need to get rep for referring to documentation? Can we take this back?

Update:
I voted myself on my article just randomly,but that was on day of documentation came live and i got a rep today

At the moment, almost all Docs reputation comes from Example upvotes. That's not terribly surprising since:

In the long run, however, I hope citation reputation actually catches up and even passes upvote reputation. One of the problems we are seeing is that it's hard to evaluate the usefulness of Documentation in the abstract. Remember how Jeff threatened a kitten because people weren't voting on questions?

Personally, I'm not convinced this problem is necessarily solvable, because it might represent the natural "market value" of questions and answers. Users intuit that answers are the real unit of work in any Q&A system and tend to favor answers in their voting. After all, the world is awash in endless questions, but answers—great answers—are a precious and rare commodity indeed.

Until it helps a real developer understand or get started with a topic, Documentation hasn't earned its salt. One of the fundamental problems I have when programming is finding the right bit of documentation quickly and without distraction. The other day, I forgot to how to zip a directory and looked it up in the manpage. In order to find a useful example, you gotta read past this line1:

So when an answer that cites Documentation gets an upvote, it verifies that the Topic or Example was useful and encourages people to link to Documentation they contributed to. We think this will produce a virtuous circle where people improve answers by linking to relevant Documentation and improve Documentation in order use it in answers.