Is it safe to edit the version list? [closed]

Ask Question
Asked 6 years, 2 months ago
Modified 5 years, 11 months ago
Viewed 199 times
11
Closed. This question is off-topic. It is not currently accepting answers.

When you have the right format for versions, but reference a version that doesn't exist (as far as Documentation is concerned), you see something like this:

Will I mess other sections up by editing the versions (like the name)? And how will the topic-specific versioning appear?

As I feared, I eventually changed the version list in a way that broke the formatting. (You lied to me, Help Center: I broke it and peer review didn't help.) Nobody can really be blamed since the change only affected other locations (really just one Example I made).

Note to everyone: the name of the technology is the line that is directly above the table:

In other words, simply changing the name is enough to mess things up. Yes, we should probably have a FR to change this behavior.

While I await approval (and/or try to get it approved by including a link here), I will share what happens when you mess up the versions.

It's not as bad as I feared, but it should be fixed ASAP.

You mess up the version picker:

(I don't know what happens to the picked versioning for existing topics.)

Any comments (in examples) using the version show nothing: 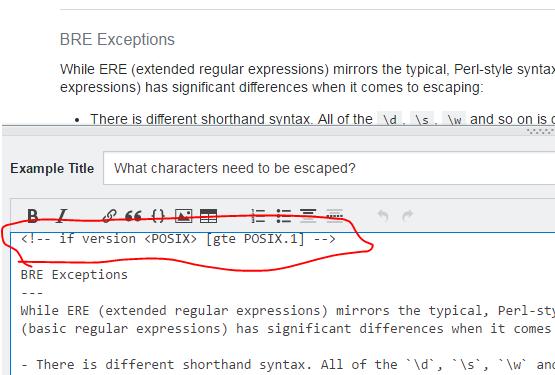