I just saw this suggestion that confused me for a couple of reasons https://stackoverflow.com/review/suggested-edits/13144329

How to deal with edits like this? From some wiki experiences, I know that this kind of edit means nothing good.

It is very strange, like nothing I've ever seen before. It does not appear to be spam, since the email address is not real. And it's a lot of effort to HTML encode things like that...

So I decided to dig deeper. Here's what I found.

An identical (HTML escaped characters, same email as the summary) BitCoin.SE incident happened over a year ago (which was linked in the comments). While there appears to be an earlier incident on Security.SE, the time difference is very strange, since in that year most people would move onto other activities.

I then went to Google, and the plot thickened: there are many results on random forums. With that random email filled in, for no discernible reason.

And finally, I think I know what happened. Actually, the answer (or question, really) comes from Security.SE:

I was spidering a website with Burpsuite and the automated Form Submission caused me to unknowingly deface the main page with "555-555-0199@example.com".

It seems like someone was playing around with burp, and did something wrong. That email is used as the default for an unmatched field, and I guess the HTML escaping is just a consequence of the process: 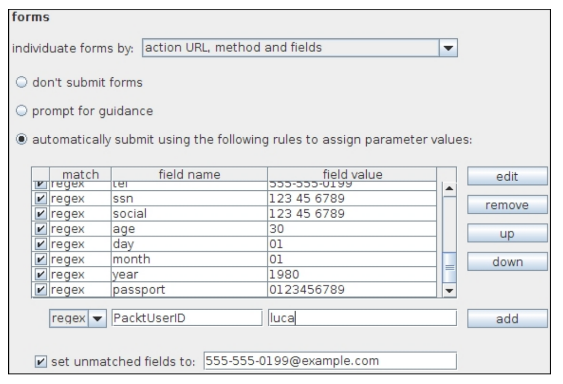 It's just a spider: reject these edits always. If it becomes a bigger problem, we should support the feature request to block suggested edits using an email summary.

Look at the markdown view. (As is virtually always the answer when it looks like nothing has actually changed.)

As you can also see from the code section, the editor HTML encoded a bunch of characters.

It's clearly a wrong change, and is pretty easy to reject. Unless you see it a ton I'm not sure it's a sign of a spammer; I wouldn't really consider it worth your time worrying about it, beyond rejecting it. There are lots of bad edits for lots of reasons, some malicious, some benign.

Not the answer you're looking for? Browse other questions tagged discussion suggested-edits .

17
Strange script or bug, while reviewing the answer

10
Review Edit - Rejected
92
Request for mod action against a user making lots of harmful backticking edits
35
Why was my tag-wiki excerpt edit rejected, even though it makes the description more accurate?
49
Suggested Edits are taking longer and longer to tackle
7
Edit suggestion rejected and edited
2
How did a suggested edit get approved after two rejections?