It seems like the Sorting Arrays topic was deleted on Monday.

The topic can still be found here, which is accessed by view prior to deletion feature.

Proposed Change for removing the example: 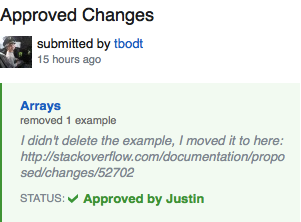 Then, the topic was recreated.

Proposed Change for adding the example: 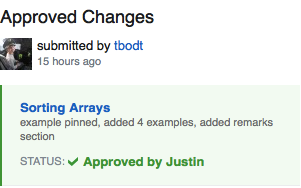 Because of this move, the example now only has 1 contributor, which was in fact contributed by 53 users and upvoted 123 times in the original example.

Even though, the user wanted to move the example to a different topic, I think Documentation should have measures in place to prevent this.

239
Documentation Update, July 25th
17
There should be a way to refine a deleted example for contributors
3
Who can delete a documentation example?