Posting as 'Answer your own question' didn't give initial reputation

I've noticed that some of the upvotes that I earned for this question didn't really count. Please, take a look at this ss: 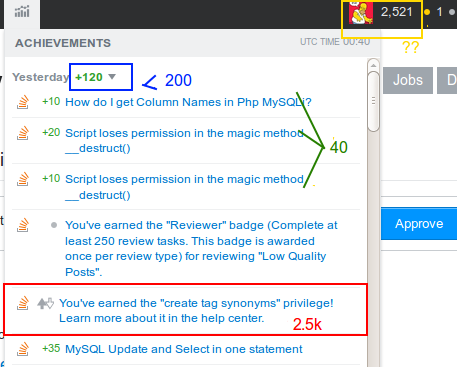 Here we can see that I've earned the privilege to 'create tag synonyms' [red]. After that I earned 'Reviewer' badge. (You'll see why I mention this)

After the privilege and the badge, I got 40 reputation points [green], but my reputation got to 2,521 [yellow] (not to the minimum needed for that privilege(2500) + 40). I didn't reach the rep cap [blue] - In fact, I've never reached rep cap. From stackoverflow.com/reputation:

I've checked "what's reputation", 'How does reputation work?', 'how do I audit my reputation' and some others... I even looked at the reputation tab with show removed posts activated, but I couldn't find anything related.

I mention that question because it's the one I posted with the Answer your own question option selected. Is there some kind of lock? Like, you only start getting reputation for that type of posts after some initial number of upvotes?

Anyways, where is the missing reputation? Or where can I figure out why it is what it is?

Edit: If I subtract the rep I got from that question / answer, I don't have enough for that privilege. Where did that achievement come from then?