I think I can speak for many users to state that the current system of reputation gain from Documentation is implemented such that users can take advantage of it for easy reputation gain. I've seen many users make very minor edits, some do not help improve the quality, on many of the popular examples. As such some users have been gaining 200 reputation a day for doing practically nothing.

While there are several users who do improve the quality of examples and make important and helpful changes. I've seen many edits that where made "Just to edit", meaning it was clear that user made a meaningless edit purely for the sake to gain reputation from that example. In fact I've seen this happen so much on popular examples that the quality of the example has been decreasing.

I don't think it's possible to separate "bad" edits from "good" edits. I do believe if this where to go on longer without any changes it will completely remove the meaning that reputation has on Stack Overflow.

Since Documentation was released to public beta recently, the current damages are not too drastic. But I don't know how will it be two weeks or a month from now. I do think something needs to change and done so quickly. Some of the ideas for changes include:

I feel that the current system encourages "Just to edit" behavior in order to get reputation, rather than edits to improve the quality of documentation.

If you're going to use reputation as an incentive for documentation purposes, you have to make sure that it encourages useful forms of participation.

Such a system is viable, but only so long as a particular post really, truly is yours. And while we do allow people to edit questions and answers, these are intended to be used to correct errors, not to fundamentally change the material.

If you start providing rep for something that isn't really yours, then reputation is no longer an incentive. Or at least, it's not an incentive to do useful things.

For example, you post an example. But your example isn't that good. Then someone comes along and basically rewrites everything you did, making the example better, but it is also wholly original. And then someone upvotes it.

Who should get the rep? If we give it to both of you, then what behavior are we encouraging? We're not encouraging large-scale edit rewrites, no. We would be encouraging being first to make examples. Why?

Because someone is far more likely to take your crap example and make it better than to remake the exact same example under that topic. If you are the first person to post a "regex string replacement" example, then you will get rep when someone comes along and makes your example better.

At the same time, if you come along and make a spelling fix that really doesn't make the example significantly easier to read, you get rep if the post gets any more upvotes. Even though you really didn't exhibit any expertise.

And yet, you can't simply say that a person deserves rep based on how much of the example they changed. Why? Because if you discover a small-but-serious bug in an example, we want people to make such an edit. It may only be changing one word for another, but in terms of the meaning of the code, it goes from being broken to being correct. That was a really important change, and it's hard to argue that you don't deserve rep for it.

So you can't use some heuristic like number of characters changed to decide if someone should get rep from the change.

I don't really see an effective solution to this problem. It seems like there will always be plenty of opportunity for bad behavior. And really, an incentive for bad behavior is far worse than no incentive at all.

Then you at least contain the damage from the premature beta release - while you fix the bugs on documentation.

And drop the marketing bs about documentation and SO being "one site". That doesn't make the reputation systems any more compatible. At best they complement each other.

We have separate reputation on all the *.SO sites already. That should work just fine.

I totally agree with this answer. If they keep rep from Documentation linked to SO it will effectively mean rep has no correlation to programming ability and we have enough struggle trying to make a meaningful link with that as it is. Usually between juggling work and/or study. It takes an effort and commitment to the site for programmers to visit the site, assist in moderating the site and make contributions.

If this continues, soon the site will be run by people with less and less programming ability and enough time on their hands to be able to grab and regurgitate examples and documentation from other sources. For most people who are programming for a living or studying, it's a struggle and effort to make time to write decent programming question and answers.

I know that when I come to meta or take time out to answer a question, I am stopping my work, my study, my family time, to make that effort. I do so because I have believed in this site and the contributions is makes for the global programming community and I have respect for the overseers, the high rep users who have been here for years.

Without true programming experts rising to the ranks of the highest rep users, the site has not real credibility as a programming site and although there is a gap between these top users and the majority of users. 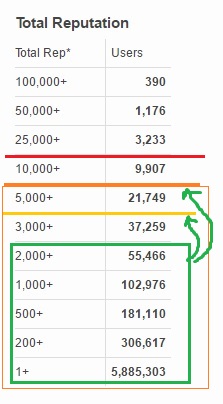 This state of the art image demonstrates the increasing trends of gaining rep without posting questions and answers.

As with the current documentation gains and with suggested edit rewards, it is quite feasible for a user to gain the majority of a 5K rep without posting a question or answer, if the documentation rep remains a part of SO rep.

There will become an increasing doubt of skill level cast upon the users up to the 10K and then approaching the 25K with the ability to earn rep in so many ways other than by providing decent content in the form of questions and answers.

Caveat: This is not intended to slur the experts who have given their time and expertise to write good content in documentation, this is my take on the rep gathering (formerly known as rep whoring) of lower rep users and the associated activity on Documentation.