Ask Question
Asked 4 years ago
Active 4 years ago
Viewed 175 times
22
Closed. This question is off-topic. It is not currently accepting answers.

Today I downvoted an example in Documentation. A popup asked me to choose why and I commented on it

But can anyone see this and if so where?
If not, this feature is not very useful. 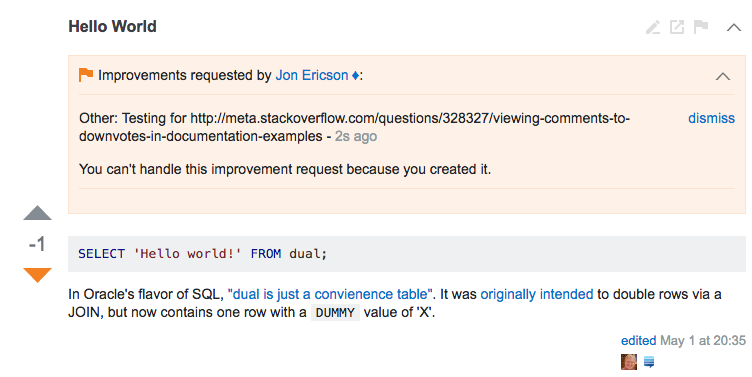 If you don't want to leave a public artifact, you can dismiss the prompt: 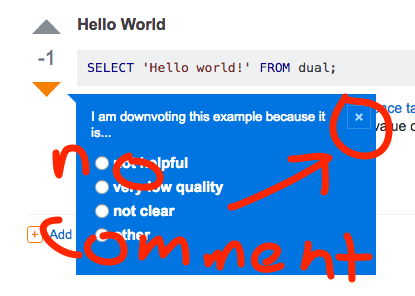 However, we hope that most people will leave feedback. Unlike questions and answers, which are usually the work of individuals, examples should be the result collaboration of several people. A downvote doesn't come with a reputation loss, so there will be no incentive for anyone to fix the problem unless the Improvement Request is created.

We don't have any plans to bring the dialog box (or anything like it) to Q&A. But a big new feature is as good a time to try new things as any. If it doesn't work, we can remove it without disrupting the habits of thousands of people. Since the path of least resistance is to pick one of the canned reasons* rather than making a custom comment, most of the reasons for not requiring comments on downvotes I can think of don't apply.

* Those reasons are also subject to change as we see how people use them. In particular, I'm worried the "very low quality" reason will be misunderstood.

Not the answer you're looking for? Browse other questions tagged support downvote-reason documentation .