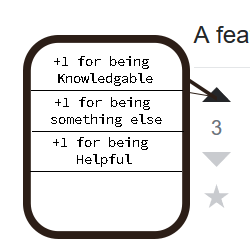 318
What can we do to encourage downvoting?
277
Enable Optional Anonymous Reasons for Downvotes on Questions
-16
SO should augment downvotes with specific, actionable, anonymous feedback to authors

36
Wondering why this question was down-voted so many times, and how I can improve it
78
Add a separate filter for "Not about programming or software development" in the close vote queue