This meta post is locked, but there is no message indicating that

-5 i can not share long code stack overflow [on hold]

I was curious why it was still around, the snippet looked pretty bad, and so I navigated to use a delete vote on it.

This is what I found when I navigated there. There was no option to delete, and even the edit link was grayed out which was strange. 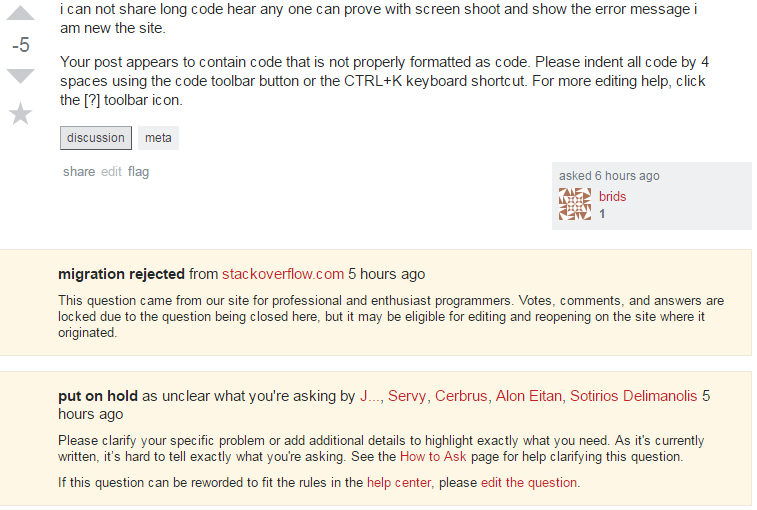 After inspecting it for a minute, I decided I would just downvote and move on, since that seemed to be the only option. At which point, the downvote failed with the message

And it became clear what was going on, but the reason I ask this question now is how did this happen? Is it because of the migration rejection paired with closure? Did a moderator lock it and the message was overwritten by the other two?

Why wasn't there an indication of being locked?

animuson♦ has unlocked the post (thank you), but the main question about why there is no lock indication is still what is being asked here.

We only display up to two post notices on any given post at a time so we don't flood the page with yellow boxes. The lock notice is super unimportant, especially when the migration rejected notice exists as that already implies it will be locked. So the lock notice gets hidden in favor of the other two notices.

22
How should one handle locked rejected migrations?

10
Why was a flag to delete an old poll declined?
4
Don't suggest visiting meta on locked posts on Meta
44
Locked post says contributors should edit, but suggesting edits is disabled for both the question and its answers
87
Why was "Needs more emoji" deleted by an employee?