Educating people to flag spam and not vote to close

Is there anything we can do to help educate users to use their flags and not their close votes on spam?

It is not uncommon to see people voting to close spam. Spam should be flagged as spam and then it will be deleted when there are sufficient spam flags on the post. Between 15 and 20% of all posts that were flagged as spam also have at least 1 close vote.

This is one of the latest examples https://stackoverflow.com/questions/38278819/high-dh-simply-means-rapid-and-better-absorption 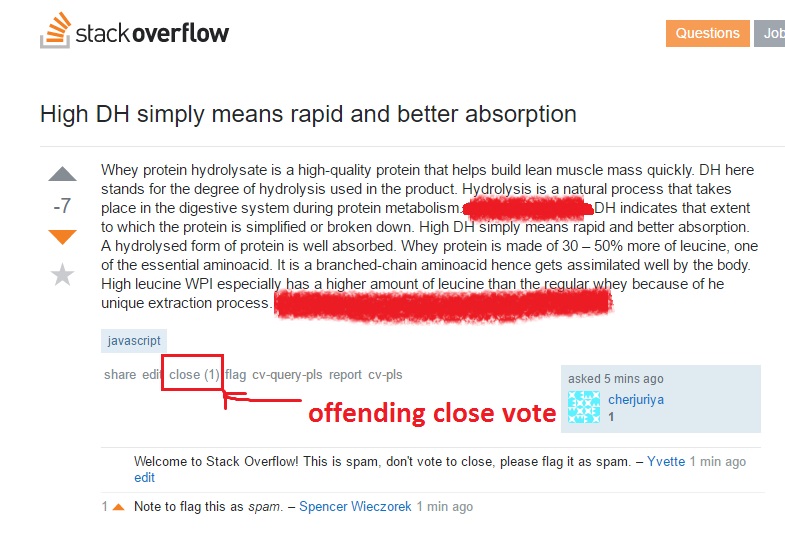 There is no point voting to close them,

From the words of Shog9

The best way to make spam ineffective is to delete it quickly! The single best thing you can do when you see spam is flag it .../

/... Just about anything else you can do is at best a waste of your time and effort, unless it somehow leads directly to more folks flagging the post as spam. 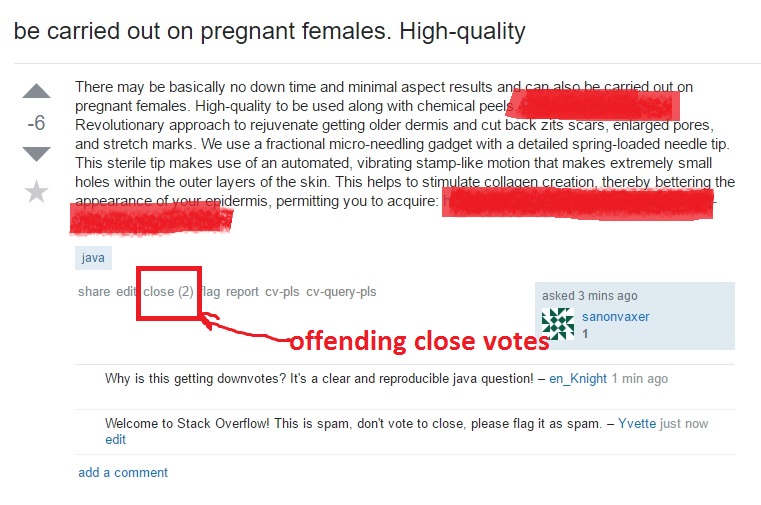 How to educate people

Things the common user can do:

Things that would take more than the common user to implement:

Really close to what others have proposed already, but how about adding a message telling people to flag the post if it is spam inside the vote-to-close popup? 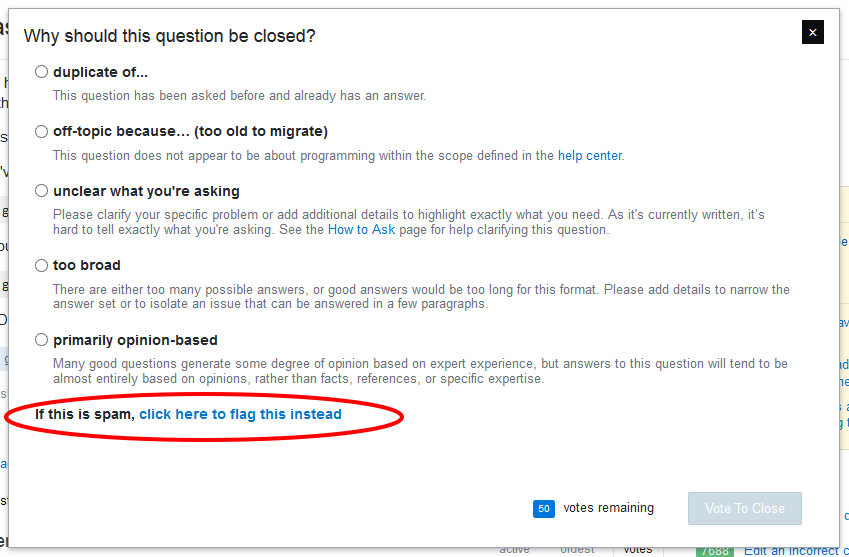 One practical way would be to have an "Is it Spam?" option right inside the Close link.

So that even if a user starts out wrong by selecting "Close" when he ought to have used "Flag" you can still later gently nudge him down the right path?

As long as users need to be specifically 'educated' to do this correctly, there seems to be something wrong with the interface. You cannot expect to get good coverage on stopping 'offending' methods by teaching, as in these posts for instance.

Several visual or technical solutions come to mind and have been proposed in other answers, but the point I'm trying to make is that if this is critical enough that we want to do something about it, 'education' is probably not the most effective?

Perhaps it is only me, but perhaps the word 'flag' is not that self evident. If you take Gmail, they have 'report spam' which cannot be mistaken. I don't know if it possible with the stackexchange system to run A/B tests to see if a change in wording would make a difference.

TL;DR: Allow the user to tell the system what's wrong and let the system decide which action to take. Don't concern the user with that choice.

... which actually seems a little backwards. Step 2 seems like a huge liability. Why do we even need it? The user shouldn't have to choose which action to take. They should merely be reporting what's wrong so that the system can take the appropriate action on their behalf:

The idea is that the UI for raising issues would offer no distinction between flag, close, or delete. Based on the problems described by the user, the system would prioritize action and route things to the appropriate queue. If the appropriate action would be to close, and the user can't yet vote to close, perhaps just thank them for their feedback and log the attempt anyway. Same thing if they're out of votes or flags or whatever. That logging could provide useful information for future discussions on rate limiting and feature metering.

As a regular it is easy to vaguely recall seeing a number of posts with issues and assume that we now have a problem.

What is much more difficult is to check the data to verify that there is in fact a problem, and use the data to assist in determining an appropriate solution.

Is there actually a problem here that needs solving?

Are spam posts that get closed instead of flagged, or closed first and then flagged common enough that we need to come up with a solution?

How can we determine if there's a problem?

What data should we be looking for to determine that spam isn't getting flagged? What does the data look like currently? What would it look like it the problem were fixed? That way, if and when we determine to implement a solution, we'll be able to tell if the solution actually solves the problem.

With all of that said, I think having a "close as spam" close option that is just an alias for "flag as spam" wouldn't hurt. Anyone voting to close questions is going to intuitively know that they want to "close" spam questions, even though that's not actually what happens to spam.

My initial train of thought was along the lines of "how can we punish these people". Now, however, I am starting to think that "punishment" is part of the problem.

You have pointed out several different actions that a user may take:

Only one of those actions has the possibility to result in "punishment", but that option (flagging as spam) is the correct option. It's possible that the flag could get declined.

If a user, in the past, has made some wrong choices and gotten declined flags, they will be less likely to flag in the future. They may also be facing a flag ban, which makes them unable to flag at all.

It's worth wondering if some of this stuff gets flagged as abusive. Or a custom mod flag is used. Custom mod flags might explain a lot.

It's also possible that the user ran out of flags, as I often did early on (before close votes, when I had very much less than 100 flags). That would also make them incapable of flagging.

Keep in mind that it's possible that a user may flag as spam, and take another action, such as down voting (likely) or close voting (unlikely). I'm not sure how much harm there is to doing either option in addition to flagging as spam.

Firstly, the entire closing system is flawed basically. It was flawed originally, and the back-pedaled "on hold" form of it was just a terminology change.

There need be only one comprehensive moderation system which confronts every type of shit there can be, from low quality on-topic posts to outright spam.

This concept of several votes which transition a question to a languishing state in which new answers are not accepted is completely pointless, and leads to the proliferation of low quality posts. In particular, there is an accumulation in StackOverflow of old, low-quality questions which are just one or two votes short of being put on hold. There are thousands and thousands of them.

The ideal way to get people not to use this "on hold" mechanism inappropriately is to consolidate it with the flagging system into a single, sensible moderation mechanism.

If the "on hold" concept must be retained, then, in recognition of the fact that people will use it inappropriately, spam should be available as one of the close reasons.

That is to say, when you click the close button, one of the choices should be: "I'm voting to close this because ... it is spam". When the user selects this, a dialog box can appear which says **"Voting isn't the right mechanism for identifying spam; would you like to flag this posting? **

Similarly, the other flagging choices could be in the voting UI, like "inappropriate", "offensive" and so on.

When people persist in going through the wrong use case flow in the UI, don't blame the people. Fix the darned UI so it steers stray users to the correct use case!

The reason is obvious: Close has a lot higher visibility than Spam as Spam is hidden behind the Flag option.

The solution is to promote Spam to a first class citizen or as @User242x suggest put some text on the Close screen.

As an aside I have only ever come across a spam post once and I have to admit I probably clicked close.

Educating people after the fact

How about educating people by sending them a mail after the fact? (Given that this really is a problem.) In pseudo code:

Even if this does not catch everything (sometimes a question might be closed instead of deleted as spam), I think this catches everyone after a while.

If the data shows that people often flag and close at the same time, we could just disable the close button ("Sorry, you can only either flag or close, prefer flag if unsure.") after flagging a post.

You don't educate people. You educate as many people as possible.

On a website that has millions of users, there will be few people ignoring the post, others voting to close but what's important is that the vast majority will flag it. If the website has only few hundred users, then yes this would be a problem, but when you have millions of users, seeing 1 or 2 or 3 close votes, it's not even 0.1% of the users.

Besides most of the people who needs education, don't bother visiting meta to read the rules, new posts and get "educated". Come one this crap which is far crappier than all the spam posts on SE ever still got 591,061 likes as of today, you still want to educate people? judging by numbers, i think SE community is well educated when compared to youtube.

Add a link on the close vote screen saying that you need to flag (or vote to delete if you have privs) (always flag) as spam.

There should be a new type of deletion: spam. Also, an option must be then added in the user preferences: View posts deleted as spam [?] (checkbox). This will be able to hide the spam, as it should.

There shouldn't be any "spam" close reason.

4
Why is there no option to close as spam?
12
Should we downvote, flag or leave comments on Spam?
263
2017 Moderator Election Q&A - Questionnaire
209
Comments asking for clarification or an MCVE are not rude/abusive
114
Show a warning when someone uses a custom close reason containing the word "spam"
66
Why was my custom flag declined? When should I use a custom flag?
161
How is this "question" not spam?
20
Email from moderator saying I shouldn't vote to close spam, even though I had also flagged it
36
Is it OK to edit obvious spam to break links?
20
Can we trial a line in the close vote reasons other with a link to flag as spam?
See more linked questions

3
Allow a close vote to replace an active close flag
1
Inconsistent flagging and close vote behaviour
57
Flag question vs. close vote vs. both?
15
What is the difference between Flagging to Close and Voting to Close?
20
Can we trial a line in the close vote reasons other with a link to flag as spam?
20
Email from moderator saying I shouldn't vote to close spam, even though I had also flagged it