What is the proper flag for an answer that just adds code to another answer (both on the same question)?

Earlier today, I encountered this "answer", which simply added some specialized code to the Accepted Answer for the same question. In my mind, the "answer" that I found is entirely dependent on the accepted answer, and cannot stand alone as an answer to the question.

So, I commented as such:

This is really just a comment on the accepted answer, and should not have been made as a separate attempt to answer.

Then, I flagged the dependent "answer" as "not an answer" to have it reviewed for deletion (and have since downvoted it). I used the basic guidance in the "I am flagging to report this answer as..." dialog to confirm that this was (at least ostensibly) a valid way to flag an answer that should be a comment on another post: 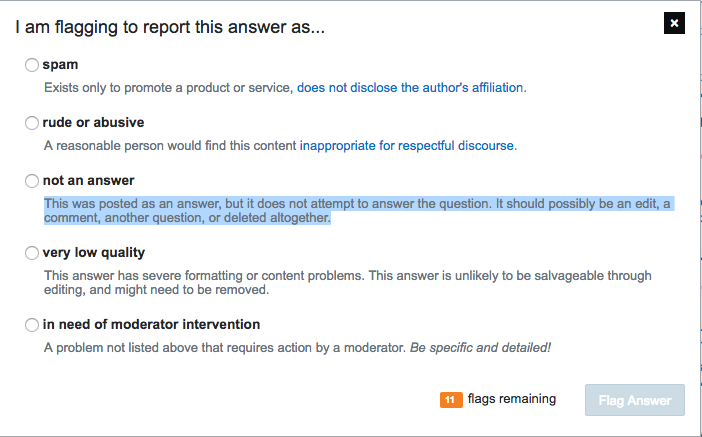 I normally would have flagged as Very Low Quality, but this question had upvotes since it was posted (more than a year ago), so was not eligible for the VLQ flag. Had it gone through VLQ, it would have been eligible to be closed as a "Comment on another post".

Note that the flagged answer does have some coding issues that have nothing to do with why it was flagged. It was flagged exclusively because it's strictly a comment on another post, even though that comment is comprised mostly of code.

The review was concluded rather quickly as "disputed". Is this is actually considered a viable "answer" on Stack Overflow? If so, which flag should I have actually chosen? Or, should I have even flagged this in the first place?

From Martijn's answer on When to flag an answer as “not an answer”? (emphasis removed):

Any post that attempts to answer the question, however badly is still an answer

Posts that enhance an existing answer are answers by definition. If you think it doesn't actually have enough of the important content to be helpful on its own, you can downvote.

Even if you think a post fails to answer the question, you should only flag the most obvious non-answers as NAA. Moderators consistently err on the side of caution when it comes to deleting answers. As moderator Brad Larson explains:

The generic "not an answer" and "very low quality" flags should be for items whose removal is obvious, particularly now that average community members will be voting on the deletion of these posts in the Low Quality Posts review queue. If it isn't, please help us out by providing the context that we might otherwise miss [with a custom flag].

So if you are absolutely sure that the other post needs to be deleted, you can raise a custom moderator flag explaining the situation. Keep in mind that moderators are expected to determine whether to delete posts regardless of any domain knowledge they have/don't have. Otherwise, comment/downvote and move on.

The post is still an answer to the question, even if looked at without looking at the answer it is based on.

You could argue that it's not a quality answer, given that it's just a code dump with no explanation, that it's incomplete, and also that it doesn't add sufficient value to the existing answers to be helpful. If you feel that way you can reflect that opinion through voting on the post.

391
When to flag an answer as "not an answer"
28
How is an Answer defined?
-3
Moderator declined an NAA flag, and the answer is an improvement on other answer

2
To flag and edit, that is the question
6
For the question "How is X implemented", is "it's trivial using feature Y" an answer?
19
How is this "Answer" not just a restatement of the question?
3
What was the proper way to flag this answer?
4
Questioning a disputed flag over an obvious VLQ answer when another in the same question was found helpful
4
Flag declined but answer deleted for same reason