Why is a featured post also under the "Frequently Asked" heading?

I'm sure for some reason this is [working-as-designed], but I'm interested to understand why. Is the below scenario because of the often used "burninate" keyword? 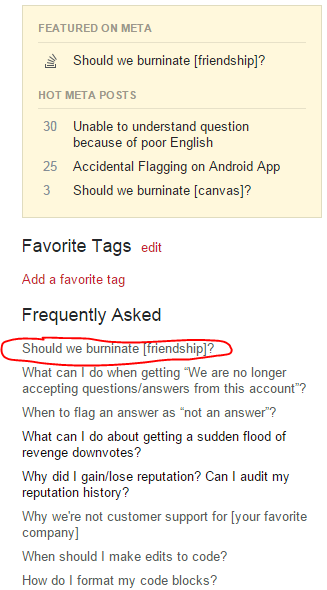 It has nothing to do with burninate-request; the relevant tag for this behavior is featured.

Both featured and faq have the same special visibility rules. Notably, both appear in the community bulletin and in a special sidebar. According to jadarnel27's answer on MSE, both tags are treated the same way. It's just that the heading for the sidebar is "Frequently Asked" because anything longer would wrap the heading to another line. Feel free to suggest a better label for that section, but since featured posts aren't very common I personally don't think it's a big deal.

7
Are these questions truly frequently asked?

4
What to do if an answer (possibly your own) solves the problem but you are also interested in why it occurs
33
Why do some burninate requests with over 20 votes not get featured?
29
Some questions sneak under the radar?
2
Need better descriptions for why post was deleted in Audit
1
What happened to the posts about Featured Images under the [featured] tag?