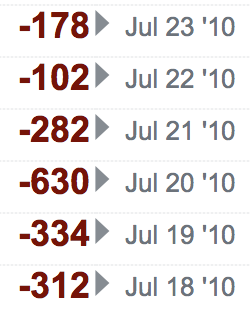 I was lucky that I noticed their edit and pinged moderator in chat asking them to decline my flag but I would really want such corrections to be based on something more reliable than luck.

342
Should Stack Overflow be more restrictive about new user registrations?
16
Offensive flag rejected
70
Count of daily spam being prevented
145
Add a red tooltip signaling that the "offensive" flag is a nuke
65
Procedure to handle spammy product recommendations posted in good faith
69
Aren't new users throttled asking questions anymore?
-22
Why do I now have 1 reputation after posting a question?

7
In what situations are spam flags declined *by moderators*?
84
A new user whose posts all contain the same URL should trigger an automatic system flag
3
Should we ban the author if there's spam/rude flags on his posts?
65
Make creating a dev story part of the "new user" privilege
17
What are the typical punishments for having a post found to be rude/abusive or spam?
75
Consensus on self-promotion and spam
17
Need clarification regarding wrongly raised and validated spam flag